A quite disturbing dystopian satire 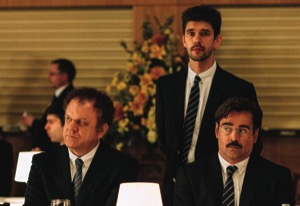 The ads running for The Lobster have been using quotes from reviews describing the film as “hilariously frightening” and “wickedly funny” between quickly edited scenes, giving you the feeling that it’s a bit slapstick. I hate this kind of bait and switch sort of marketing. The movie is much, much more disturbing than it is funny, and often it’s funny simply because it’s so creepy and disturbing; nervous laughter is almost a gut reaction. I expected a wacky romp, but after the screen faded following the final, devastating scene of the film – maybe the most disturbing final scene of a film I have seen in a long time – I just sighed and said, “Well, that was f—ked up.” But just because its marketing is a lie doesn’t mean the movie isn’t a work of art, a haunting, unsettling, gorgeously filmed dystopian satire.

Colin Farrell is David, a schlubby man whose wife of 12 years has just died. In his world, you cannot be single. He arrives at a resort – where he is de facto imprisoned – and given two months to fall in love and partner up or be turned into an animal. He arrives with a dog, who we discover is his brother who failed to find a wife a couple of years before. The hotel’s manager (Olivia Colman) asks him what animal he’d like to become. “A lobster,” he says. “Why a lobster,” she asks. “Because lobsters live for over one hundred years, are blue-blooded like aristocrats, and stay fertile all their lives. I also like the sea very much.” She approves:

“I must congratulate you. The first thing most people think of is a dog, which is why the world is full of dogs. Very few people choose an unusual animal which is why they’re endangered. A lobster is an excellent choice.”

David is sad, mostly passive, and quietly desperate; a lisping man (John C. Reilly) is dopily uncritical of his situation; a limping man (Ben Whishaw) is as cynical and dishonest as a mercenary; the beautiful woman (Angeliki Papoulia) they’re all initially intrigued with is a heartless sociopath. They eat in banquet halls, play tennis, golf, go swimming, and hunt down “loners” in the woods, shooting them with tranquilizer darts. As time goes on, people fail – becoming ponies, camels, peacocks – and those in danger of failing get more anxious and begin looking for the flimsiest reasons to fall in love, or pretend to.

After David’s attempt at surviving as a human ends in spectacular, horrid disaster, he runs into the forest and joins the loners. While they are free from the confines of their repressive society, they aren’t any nicer. You must be alone, or else. Flirting is punished with torture. One of the loners is played by Rachel Weisz, and she is one of the few characters in the film with some love for the world, an easy smile, and hope. David is smitten. But the loners’ leader, who Léa Seydoux plays with seething evil, is keen to enforce the rules.

Yorgos Lanthimos’ film is shot with clear inspirations from Stanley Kubrick, using perspective, symmetries, and slowed movement to create a stark visual poetry perfect for the film’s themes. His and Efthymis Filippou’s screenplay, which is wholly original, terrifying, and yet romantic, never goes where you’d expect. I’m sure this made marketing difficult, since it made viewing difficult. But I haven’t been able to stop thinking about it though. The scathing critique of the social pressure to pair up, of the conflicting selfish desires to cave in and to run away, got under my skin. Because I’m single. It’s not very funny.