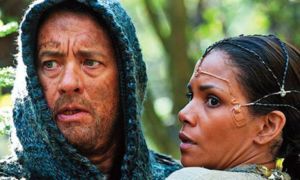 The connections are tactile when one character in one time is reading the letters of another in another time. But the connections are more importantly thematic and metaphysical. Cosmic even. In a long novel, these sort of connections can slowly, subtly get under your skin. That seems to be one of the reasons the fans of the novel Cloud Atlas are so intent, even evangelical about its excellence. Knowing that such an experience is waiting for me, I keep the book on my bedside table. And it’s also why I was disappointed with the film adaptation, a technically astonishing but falsely profound epic made by the people who brought you The Matrix and Run, Lola, Run.

Much has been made about the complexity of the plot, or rather the plots. I don’t think anyone should be worried. If you can follow Game of Thrones on HBO, you can follow Cloud Atlas. This is because Lana Wachowski, Tom Tykwer, andAndy Wachowski’s screenplay take the six stories and cut back and forth between them with such careful pacing and such clear visual and musical segues that the storytelling is always clear. However, in forcing this clarity, the trio makes the connections between the stories, the characters, and the story’s tropes so blunt, it’s almost as if there are supertitles saying, “Here is where you’re supposed to feel something! Now! Feel it!”

The profundity that we’re told to see is not just in cosmic connectivity, but also in the themes concerning slavery, corporate greed, tribalism, and the transcendental nature of love. Just in case you were wondering: slavery and corporate greed are wrong. Very wrong.

I predict that most people will be most affected by the stories of the Korean clone slaves (starring an Oscar-worthy Doona Bae and Jim Sturges in, unnervingly, Asian make-up) and the story of the post-apocalyptic goatherder Zachry (Tom Hanks) who guides the scientist Meronym (Halle Berry) through the forest and mountains.

But I also loved the 1930s gay love story between Ben Winshaw and James D’Arcy.

The film is a towering achievement of editing, writing and directing, with several great performances (Jim Broadbent, Hanks and Bae), but it is not nearly as deep as the Wachowskis and Tykwer want you to believe. For that, I guess, I’ll need to read the book. I’ve opened it now.