Alcoholism and confusion in the cornhusker state 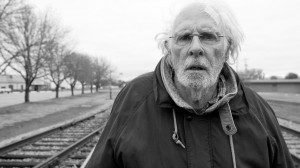 I am a sucker for father-son movies, so much so that I’ve wept openly at movies of such disparate quality as the lovely The Sum of Us (Russell Crowe’s gay son living with his hilariously supportive father Jack Thompson), the fine Frequency (Jim Caviezel talking with dead father Dennis Quaid through a mystical shortwave radio), and truly stupid Jack Frost (Michael Keaton comes back from the dead as a mystical snowman to help his son). Also, I’m maudlin, and I cry a lot. But I wasn’t triggered much by Alexander Payne’s Nebraska, which I was primed to love. (I’m sure it’s not because I’ve become un-maudlin, since I cried like a baby during the Finn-is-dead episode of Glee a few weeks ago.) Directed by the great Alexander Payne, who gave us Election, Sideways, About Schmidt, and The Descendants, Nebraska is a wry, spare, black-and-white story about an aged, alcoholic father and the son who joins him on a road trip to pick up a million-dollar sweepstakes check that probably doesn’t exist. Because of its pedigree, I expected a great deal more than I received.

The film opens with frail, blank-staring Woody Grant (Bruce Dern) stumble-walking down the side of a road, prompting a police office to pull over and ask him where he’s going. Next, his youngest son David (Will Forte) arrives at the police station to pick up his father, who tells him that he’s trying to walk to Lincoln, Nebraska. That is the location of the company that sent Woody Publishers Clearinghouse-like junk mail that Woody insists says he has won a million dollars. When David asks his father why he didn’t just ask the company to mail him the money, Woody says that he wasn’t going to trust the postal service with a million dollars.

David’s round, crass mother Kate (June Squibb) is frustrated and enraged by not only Woody’s absurd belief that he has actually won the money but also by her husband’s increasingly erratic behavior. David’s newscaster brother Ross (Bob Odenkirk) agrees with his mother, but sweet David decides to humor his father, call in sick at the electronics store where he sells stereos, and drive him from Billings, Montana, to Nebraska. Unfortunately, Woody is a stubborn alcoholic, and after a drunken fall, the trip gets delayed, and the father and son end up spending the weekend in Hawthorne, Nebraska, where Woody and Kate grew up. Complications ensue when Woody tells old friends that he has won a million dollars.

There is a great deal of Oscar buzz about Dern’s performance as Woody, and I’m not sure why, other than Payne’s reputation and Dern’s long career, why this is so. Most of Dern’s acting in Nebraska is in his awkward, old man’s shuffle and his expression-less gazes into space. We’re told that the Grant men don’t say much – at least the old ones, since David and Ross aren’t so taciturn – and that means Woody has little to say other than “What?” He expresses very little emotion other than irritation, even when he’s humiliated or when a truly moving story about his childhood is retold.

Forte has much more to do, and his painful childhood but empathic adulthood make him the most sympathetic character; Forte is clearly more than a hammy Saturday Night Live bit player. Besides the stunning black and white cinematography, the best thing about the movie is Squibb, who has by far the best lines and most emotionally interesting scenes. Granted, it’s always funny when old ladies have potty mouths, but as she transforms from harpy to ardent defender of her family, her performance reveals itself to be deeply layered. If only the rest of the movie was as good.