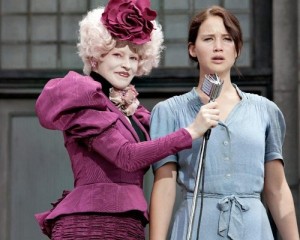 So, The Hunger Games opened today, and my review won’t go to print until next Thursday, so I’m putting it up now. I couldn’t have written a book about this movie, but I stayed within my word count, mostly. Here it is.

Over the last ten years, Hollywood has been obsessed with turning young adult sci-fi and fantasy series into billion dollar film franchises, and not always successfully. For every Harry Potter and Twilight there have been movies like The Golden Compass and The Dark Is Rising. While the Harry Potter movies eventually became watchable, even good, the rest of the franchises have been cinematic porridge: mushy, dull, forgettable. Compared to all of these, the film adaptation of The Hunger Games is Citizen Kane. Based on the first novel in the wildly popular Suzanne Collins trilogy about a post-apocalyptic dystopia where former rebel districts must send teen-agers to an annual fight to the death, The Hunger Games is a relative, not actual, masterpiece. It is exciting, inventive, infuriating, weird, long, and ultimately very entertaining.

The plot is a basic competition story, while the broader universe in which it is played out is not at all simple. Katniss Everdeen (Jennifer Lawrence) lives in the poorest of the former rebel districts, and when her little sister is chosen by lottery to be the girl “tribute” at the Hunger Games, Katniss volunteers. Katniss has made her living hunting, and she actually has the skills that might be needed to survive the games. The boy tribute is Peeta Mellark (Josh Hutcherson), a charming but much less able fighter. They are given a mentor, a former winner of the games, named Haymitch (Woody Harrelson), who is a drunk, but a wise one. The other 22 fighters run the gamut of barely able but sweet 13-year-olds to highly trained and vicious near-adults, with skill levels dependant on the wealth of the district from which the kids hail.

The games, which are run as something like a cross between American Idol, The Olympics, and Roman gladiator contests – with a huge dose of Lord of the Flies barbarism – are hosted by Caesar Flickerman (Stanley Tucci) and produced by Seneca Crane (Wes Bentley), all under the watchful eye of the sinister President Snow (Donald Sutherland). The first half of the film follows Katniss and Peeta’s selection and training in the sparkly Rome-meets-Singapore Capitol, and the second half focuses on the brutal and bloody battle in the forest arena

There are two stars of the film: Jennifer Lawrence and the production design. Lawrence, who was nominated for an Academy Award as the heroine of the country noir masterpiece Winter’s Bone, is basically playing the same role in The Hunger Games. In both, her father is dead, mother is useless, sister needs her, and her courage and hubris both get her in trouble – and she kills and cooks squirrels. Lawrence’s intensity, whether she’s firing an arrow or crying over a friend’s death, is her greatest attribute as an actress, and Katniss is a perfect role for her. With the exception of Stanley Tucci’s wild, ridiculous performance as Flickerman, Lawrence is the only actor whose performance is indelible.

Gary Ross’s direction involves a lot of handheld camera work in Katniss’s drab district and during the anxiety of games, but when he is shooting the Capitol, he gives us long and lingering shots of the retro futuristic architecture and cityscape designed by Phillip Messina and the insane costumes of Judianna Makovsky, who seems to have been inspired by Louis the XIV and Leigh Bowery.

As fun to look at as that all is, that androgyny and garish effeminacy are meant to telegraph the evil of the Capitol’s men, that its women are all vapidity and pancake make-up, seems a bit obvious to me. And I was disappointed that story’s politics – class warfare, brutal starvation, and rule by child murder – are under-examined in favor of the easier, and duller, theme of survival of the smartest and scrappiest. Structural violence and forced poverty are not themes that billion dollar film franchises are based on.