‘Batman v Superman’ will make fans eager for the next chapter 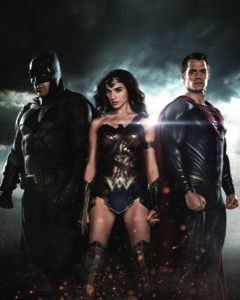 I was unable to see the mega-hyped, mega-budget Batman v Superman: Dawn of Justice before other critics ran their reviews. And because many of the reviewers were so dismissive or so hyperbolic in their criticism, the news of the film’s opening was overshadowed by the blood sport of Internet overkill. The Wall Street Journal’s Joe Morgenstern called it “underdeveloped, overlong and stupendously dispiriting” and NPR’s Chris Klimek described the film as “a ponderous, smothering, over-pixelated zeppelin crash of a movie scored by a choir that sounds like it’s being drowned in lava.” A meme of Ben Affleck’s dejected facial expression in response to hearing about the reviews was shared by millions of people who weirdly find glee in the sadness of others. I found it impossible to avoid knowing that a lot of people thought the movie was terrible. But when I did see it, I was perplexed. While BvS is certainly not a masterpiece of the genre – neither as morally complex and smart as The Dark Knight nor as fun and thrilling as The Avengers – it is hardly a “zeppelin crash.” It’s pretentious and bombastic and it rewrites the central ethos of its main characters in ways that are disconcerting for some longtime fans. But it’s not an ineptly made film.

The main action of BvS takes place two years after the end of 2013’s Man of Steel, which was Warner Bros. and director Zack Snyder’s reboot of Superman and the creation of an interlinked DC Comics Universe. Man of Steel wasn’t terribly made either, but it had a huge and creepy problem: This new Superman (Henry Cavill) was not the ethically flawless hero portrayed in the older Christopher Reeves films and much of the character’s comic book history. He was tortured by darkness and doubt, and in his ultimate fight with General Zod, not only does he allow thousands of people to die in Metropolis during their sloppy slugfest, but he breaks Zod’s neck. Superman has never killed and never would have allowed innocents to die. It was a strange thing for Snyder to do.

But when the major plot points of BvS were announced, it started to make a little more sense. Bruce Wayne (Ben Affleck), the Batman of Gotham City, loathes and fears Superman for just the reasons the end of Man of Steel was so disturbing. Superman is a dangerous killer, the man responsible for the deaths of many of Wayne Enterprise’s employees, and Bruce wants him destroyed. He says to his butler Alfred (Jeremy Irons): “He has the power to wipe out the entire human race and if we believe there is even a 1 percent chance that he’s our enemy we have to take it as an absolute certainty … And we have to destroy him.” This is the same bizarre justification Dick Cheney used to wage endless war in the Middle East. Yes, there’s some consistency to the plot now. But now Snyder has not only made Superman a killer, but Batman, too. In addition to planning the murder of Superman – through a rather convoluted espionage involving the kryptonite obtained by Lex Luthor (Jesse Eisenberg) – Batman kills countless random bad guys during the movie. Batman doesn’t kill. Well, he does now.

Will Wonder Woman (Gal Gadot) kill, too? She doesn’t in BvS, but who knows if she will in her solo film, due next year. She is the most exciting thing in this movie, partly because Gadot seems to be having fun; the weight of the world is not on Wonder Woman, as it is on both Batman, determined to save the world, and Superman, who is unsure he is a hero, a savior or an accident.

All of the other characters, played by various A-list actors picking up paychecks (Amy Adams as Lois Lane, Laurence Fishburne as Perry White, Diane Lane as Superman’s mother, Holly Hunter as a senator, and Scoot McNairy as one of the victims of the Superman-Zod battle), brood about and make various speeches about power, cynicism, heroism, good and evil. Some of these are great, some are less so, and, contrary to some of the critics, they do make sense. There are plot holes clearly created by editing a longer movie down to two and half hours, and there is one terrible, weirdly Oedipal pivotal scene that I’ll never forgive writers Chris Terrio and David Goyer for. But the film, in its lumbering, overstuffed, self-important way, does what it sets out to do: It creates a complex fictional universe by uniting its three greatest heroes, all of whom are played by actors doing great work. They have some great battles, say some good lines, and made a lot of fans eager for the next chapter.