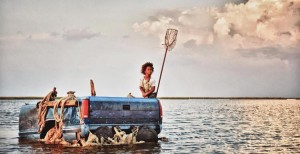 While Beasts of the Southern Wild doesn’t open in San Diego for a week, it is open in some other cities, so I thought I’d post my review here now; it will run in LGBT Weekly next Thursday.

At the moment, very few cinemas are showing movies that aren’t loud, computer-generated products for the teen masses. The summer tends to be dominated by movies like The Avengers and Brave and Ted. The small art houses do their best to counter program with nerdy crowd-pleasing indies; this is why Wes Anderson’s wonderful Moonrise Kingdom is doing so well – though it is doing well not just because it’s skillful and smart but also because it has Anderson’s brand attached. Entering into the art house mix is a much weirder, much more daring film from an unknown filmmakers, and it deserves all of the indie filmgoer’s attention and praise, if not more, that Anderson has been enjoying this summers. Beasts of the Southern Wild is unlike anything I have ever seen, a wild and sweet and gritty fantasia about childhood, loss, poverty, individualism and, metaphorically, Hurricane Katrina. It deservedly won the Grand Jury Prize at Sundance this year and the Caméra d’Or award at Cannes.

Hushpuppy, played by the preternaturally talented then-five-year-old Quvenzhané Wallis, lives with her drunk and sickly father Wink (Dwight Henry) in a tin and plywood shack in the deep bayous of southern Louisiana. Willful, reckless, ingenious, and independent, Hushpuppy wonders about her missing mother and refuses to admit to her other off-the-grid neighbors that Wink cannot do what he should to care for her. When a violent hurricane arrives and floods the entire area, Wink and many of their neighbors refuse to leave, and suddenly a ramshackle community comes together to take care of each other, as well as they can.

The hurricane coincides with images of the polar icecaps melting and breaking apart, releasing prehistoric aurochs, which look like a cross between giant wild boars and buffalo. The aurochs are galloping toward Louisiana as Wink’s condition worsens, and Hushpuppy and several of the other children go in search of Hushpuppy’s mother.

This plot in itself is reminiscent of a dark southern fairy tale, as if Roald Dahl was rewritten by Toni Morrison. Unlike, say, Disney, the themes of this fairy tale are never bluntly laid out. The strength of community in the face of environmental disaster and governmental incompetence is one of the clearest, while others concerning the hubris of thoughtless individualism are less obvious.

While the plot is fascinating, the performances of Wallis and Henry and director Benh Zeitlin’s visionary auteur turn in creating the southern wild are what make Beasts so extraordinary. Wallis’s acting belongs in the pantheon of uncanny performance by children – Tatum O’Neil in Paper Moon, Anna Paquin in The Piano, Haley Joel Osment in The Sixth Sense – and she’s so funny, witty, vulnerable, and brave that she will probably be remembered during awards seasons. Henry is an open wound of a failed and flailing father, but his performance is more recognizably a type.

Zeitlin’s use of these two actors, as well as a host of amateur locals, within the decayed, jury-rigged houses and rafts, and the shredded, over-exposed landscapes make for a film that looks unlike anything else in recent American cinema. While Zeitlin’s visuals could be compared to the discomfiting specificity of Spike Jonze, the odd naturalism of 1970s Werner Herzog, and even the sweep Terrence Malick at times, Zeitlin and his cinematographer Ben Richardson have crafted an original work of art.

Beasts of the Southern Wild