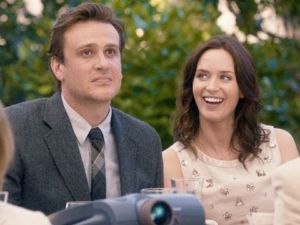 I kind of loathed The Five-Year Engagement. My review will run in LGBT Weekly next week, but it’s open now, so here’s a preview.

I’m currently getting divorced, so filmed engagements have started to irk me, and as I watched the opening scenes of The Five-Year Engagement, in which Tom (Jason Segel) fumbles through his proposal to Violet (Emily Blunt), I thought, “This is going to end in tears, you nitwits.” Sometimes a movie hits a little too close to home, and it’s hard to react to it as a critic when you’re so busy reacting to it as yourself. Of course, all criticism is personal, just as taste is, and all critics are idiosyncratic about what they like and what the hate. And so, I had a terrible time watching The Five-Year Engagement. I am fed up with the character Jason Segel has typecast himself as, and I found the script both absurd and retrograde, complete with offensive stock supporting characters and a subtly anti-feminist message.

Needless to say, after the engagement, it takes Tom and Violet five years to get married. First, Tom’s best friend (Chris Pratt) and Violet’s sister (Alison Brie) hook-up at the engagement party, the sister gets pregnant, and their wedding steals Violet and Tom’s thunder. Then Violet gets a job at the University of Michigan, and so Tom and Violet move from San Fransico to Ann Arbor and delay the wedding. And then Violet’s job gets extended, and they delay again. And then Violet’s boss Winton (Rhys Ifans) causes some complications, and they delay again. And so on.

As Tom and Violet did everything wrong, from dishonesty and pettiness to careerism and selfishness, I thought, “Yep, I was right. You nitwits.” Like Violet, I am an academic who moved my man across the country and then watched him make the transition with a great deal more difficulty than I did. Like Tom and Violet, we had stupid fights about nothing. Like Tom, I got resentful and did weird things with my facial hair. Actually, my soon-to-be-ex did that, too. Though neither of us was ever as pathetic as Tom, Jason Segal’s most irritating role yet.

Jason Segel has now played the same self-deprecating frump a couple dozen times, from Nick in Freaks and Geeks to Marshall in How I Met Your Mother, and three times (Forgetting Sarah Marshall, The Muppets, The Five-Year Engagment), he, with and Nick Stoller, has written his own character that way. This enormous schlub with self-confidence problems and a penchant for using his naked ass for laughs has started to grate on me like a wool t-shirt.

Also grating are the many “wacky” jokes he and Stoller wrote. Beginning with the party where Tom and Violet meet – in which Tom is in a pink bunny suit and Violet is dressed as Princess Diana – the jokes are cute in theory but never actually funny: There are the sight gags based on the terrible and terribly knitted sweaters Tom’s friend Bill (Chris Parnell) makes, and there are the bizarrely flippant jokes about Violet’s grandparents dying one by one while waiting for her to get married. And then there are the minorities whose Otherness is used for easy laughs: a heavily accented Asian nerd (Randall Park) and a crass lesbian (Lauren Weedman) who is so selfish that she is against marriage in general, including gay ones.

Emily Blunt, despite her surroundings, is as sharp as Segel is dull. Possibly because of her patrician English accent but more likely because of her beauty and poised ease as an actress, she outclassed everyone else in the film. It’s unfortunate, however, that Segel and Stoller decided to have almost every extension of the engagement caused by her career or her mistakes. Tom is completely emasculated by Violet’s success, and the film is structured so that the viewer sympathizes with him, and not her. Worse is the misogynistic plot twist that sends Violet back to Tom at the end. I won’t ruin the film by revealing it. But I hope you won’t bother seeing it all.