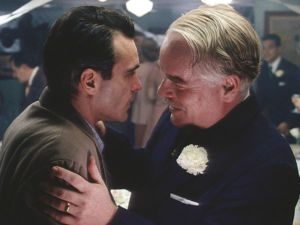 I didn’t come up with that, the great Time Out New York critic Adam Feldman did. But it’s so awesome. Meaning, both the quote and the movie.

While a great deal of the press about The Master is focused on how it is supposedly a fictional retelling of the birth of Scientology, I think this does a disservice to both the film and to Scientology. A comparison: The Social Network was a fictional retelling of the birth of Facebook: The protagonist was a character named Mark Zuckerberg, and many plot points in the film actually happened. But the film was fiction; it was only based on a true story. While The Master may have been inspired by L. Ron Hubbard’s early days, it is not about him, nor Scientology, nor even about the birth of religion. The Master is about the relationship between two men, Freddie Quell (Joaquin Phoenix), a restless, somewhat disturbed, somewhat animalistic drifter, and Lancaster Doss (Philip Seymour Hoffman), a charismatic, charming, and narcissistic metaphysicist. Through this relationship, writer and director Paul Thomas Anderson explores what it means to be human, what it means to have control, and what it means to relate to other people. The resulting film is weird, disturbing, fascinating, entertaining, and profound.

The first 20 minutes of the film follows Freddie from the end of World War II to a hospital, where he was treated for what eventually would have been called post-traumatic stress disorder, and then through two jobs that he ran away from after wild, irrational fights. It’s clear that Freddie isn’t suffering from PTSD, but is rather somewhat either mentally ill or mentally disabled. His id is in control, if the id can control. He’s obsessed with sex, physically violent, and makes and shares drinksconcocted with liquor and, it turns out, paint thinner. One night, drunk and adrift, he wanders onto a boat docked in San Francisco, and he wakes to discover that he’s at sea with Lancaster’s family and friends, celebrating the wedding of Lancaster’s daughter. Lancaster becomes captivated by Freddie, and by Freddie’s drinks. Lancaster, the king of the crowd, is prone to metaphorical speechmaking and lofty pronouncements.

Freddie is taken in by Lancaster’s enormous personality, and he allows Lancaster to show him the methods for which he has became both famous and reviled for. The scene where Lancaster “processes” Freddie with quick, intense, somewhat psychoanalytic questions is one of the most intense, uncomfortable, and mesmerizing I have seen on film in years. For it, I think Phoenix will win a host of awards. His performance is as great as Daniel Day-Lewis’ Oscar-winning turn in Anderson’s last film, There Will Be Blood. It may be better. Phoenix has always been a bit dangerous and unpredictable on screen, but in The Master he has a character that is also dangerous and unpredictable, and as directed by Anderson, he has the space, in long shots and long scenes, to explore fully the physical expression of Freddie’s emotional agitation. The Master isn’t a thriller, but watching Phoenix play Freddie was just as suspenseful.

After the boat returns to the United States, Lancaster – also known as the Master – takes over powering the plot. He and his entourage stop first in New York and then Philadelphia, and as Lancaster woos followers and fights with his detractors, Freddie becomes part of the Doss family. This creates various conflicts with Lancaster’s young and formidable wife (Amy Adams), his son (Jesse Plemons), his daughter (Ambyr Childers), and her husband (Rami Malek). Freddie is Lancaster’s mascot, protégé and pet, and Lancaster is determined to process Freddie into a fully controllable and in-control human, to fight his drunkenness and his animal impulses. But Freddie is not sure if he wants to, and Anderson does not tell us whether Lancaster is charlatan or whether Freddie is beyond help. Instead, he lets us experience the two men, as ego and id, in a weirdly loving battle of both wits and passion.