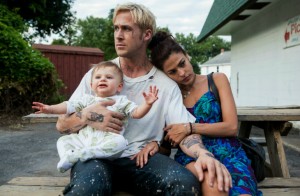 I miss the days when movies occasionally had long weird names like Whatever Happened to Baby Jane? and They Shoot Horses, Don’t They?and To Wong Foo, Thanks For Everything, Julie Newmar. The long name certainly didn’t indicate excellence, but rather a quirky nature; this was not meant to be a mainstream movie.

Those usually have short names that are easy to remember, like Gladiator and The Notebook and Lincoln. The differentiation isn’t always true, but when you see a title like The Place Beyond the Pines nowadays, you know it’s going to be artsy. And I like artsy, and I like weird, and I like experimental. But the thing about experimental movies is that experiments are done to see if something works. The Place Beyond the Pines, despite writer-director Derek Cianfrance’s Herculean efforts at creating country noir and Ryan Gosling’s smolder, doesn’t work.

The main reason is the film’s conceit, that the plot, focusing on three men in upstate New York over a generation, would be completely linear. In the first act, a daredevil motorcyclist named Luke (Gosling) turns to crime in order to support his ex-girlfriend (Eva Mendes) and their baby. The second focuses on the cop, Avery (Bradley Cooper), who catches Luke and struggles to make his way in a corrupt police force.

[Spoiler alert!] And the third act is the story of Jason (Dane DeHaan), Luke’s son, who has grown up not knowing about Luke and who is very troubled, even more so when he is befriended by Avery’s thuggish teenage son (Emory Cohen). After the first act, we never see Luke again, and in the second, we barely see Avery. The film ends with Jason, alone.

The shifts, to say the least, are jarring, and each act is less strong than the previous one. The first, of course, doesn’t have the problem, and with the focus on Gosling, his intense feelings of duty and frustration, these opening 40 minutes or so are entrancing. It’s a performance reminiscent of his work in Drive, but much more raw; Luke has much less confidence and much less control over his emotions than the Driver did.

When Luke is gone, we’re left with Avery, and Cooper, however great his potential (as evidenced in Silver Linings Playbook), cannot hold an audience’s attention like Gosling can. Also, Avery just isn’t as interesting a character, and going from a story with such high emotional stakes to one focused on small-town policing ethics is a rather big letdown.

But when the film shifts to Jason, things just get weird. We have no idea why Jason is such a mess. His mother married a nice man, and simply being adopted isn’t enough to explain his anger and rebellion. DeHaan, so great in Chronicle, was simply redoing his work from In Treatment, except doing it as a heterosexual.

But stranger still is AJ, who has a working class Long Island accent despite having grown up in upstate New York, and both Avery and AJ’s mother (Rose Byrne) have accents from central casting. Also, why is he such a thug? Because he grew up with his mother and not his father? Who knows? And wondering the whole time made me quite distracted. (Also, I was distracted by trying to figure out who Cohen was, and then it hit me. He was the mopey son of Debra Messing’s character onSmash.)

Cianfrance, who made the acclaimed Blue Valentine, was perhaps too ambitious for his own good. If he had stayed with Luke’s story, or figured out how to integrate Avery’s with Luke’s, the film could have worked. But it seemed as if Cianfrance wanted to make an artful epic about fathers and sons and anger and duty. But like its title, the movie was too long and too weird to work.

The Place Beyond the Pines