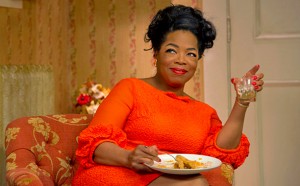 One of the problems with starting a movie with the words “Inspired by a true story” written on the screen is that most people will focus on “true story” and not on “inspired by.” That phrase opens Lee Daniels’ The Butler — which I will refer to as The Butler from now on both because the stupid copyright fight that forced Daniels’s name onto the film is stupid and also because the editor in me is appalled that they used Daniels’ and not Daniels’s – and it began to bother me about ten minutes into the film, when the first series of utterly absurd plot developments occurred: In 1926, on a cotton farm in Georgia, the boy who will become the butler for six presidents watches his mother (randomly Mariah Carey) dragged into a shed where she’s raped and then his father shot in the head for protesting. In some vague form of sympathy, but not guilt, the murderer’s grandmother (randomly Vanessa Redgrave) tells the boy to stop crying before informing him she’s going to teach him how to become a “house nigger.”

And I muttered in my seat, “Really? All in one hour?” Obviously, this could have happened; worse has and will happen. But it strained credibility for me. As it should have. Despite the word “true,” and the publicity story that the film is actually about the black butler who served six presidents from Eisenhower to Reagan, almost nothing in the film is true, except that a black butler served six presidents from Eisenhower to Reagan. The real man, Eugene Allen, must not have had as interesting a life as his work history might indicate, so Lee Daniels and his screenwriter Danny Strong have turned him in Cecil Gaines, who is basically the black Forrest Gump, witnessing just about every single event of the Civil Rights Movement. Unlike Forrest Gump, however, The Butler is not meant to be a fable, nor is it well directed and certainly not well written. The Butler is a nicely acted and enormously earnest movie about civil rights, honor, duty, and the value of hard work. It’s also obvious, bombastic, and, occasionally, unintentionally funny.

Forest Whitaker plays Cecil as an adult (after Michael Rainey Jr. plays him as a child and Aml Ameen as a teen)         , an impeccable butler who, after being trained on the cotton plantation and by a gruff if kindly hotel butler, is noticed by a White House official at the Hotel Excelsior in Washington, DC. He is hired to serve under Eisenhower, and he stays through Reagan. He seems to be pouring coffee in the Oval Office during every major presidential discussion of civil rights, from Eisenhower enforcing Brown vs. Board of Education to the Civil Rights Act of 1964, from the FBI targeting the Black Panthers under Nixon to Reagan’s unconscionable refusal to sign a bill placing sanction on Apartheid-era South Africa. Occasionally, he is asked his opinion – the best scenes are with Nixon, played by a hilariously hammy John Cusack — and he always deflects. The key to his success is how apolitical he is, and the only glimpses of his political consciousness comes when he asks that he and his fellow black workers (including a delightful Cuba Gooding, Jr. and Lenny Kravitz) be paid the same wage as white workers and when he finally retires possibly because of Reagan’s kindly condescension. But most of the time, he is enraged by the political activism of his son Louis (David Oyelowo), first for lunch counter sit-ins, then for being a Freedom Rider, and worst, for joining the Black Panther Party, which Louis conveniently leaves before they became violent. He’s Jenny to Cecil’s Forrest. Happily, Louis doesn’t die of AIDS. Cecil’s other son Charlie (a hilarious Elijah Kelley), however, doesn’t survive Daniels and Strong’s aggressive, overly scored point-making.

And then there’s Oprah Winfrey, who plays Cecil’s wife Gloria. As measured, subtle and controlled Whitaker is as Cecil, Winfrey is excessive and unmoored and both deliberately and accidentally hilarious. Combined with the some of the most absurd costuming I’ve seen in a while, including the worst use of 1980s tracksuits in film history, Winfrey’s Gloria approaches high camp. She was so entertaining and interesting, I wish I’d seen two hours of her drunkenly hosting soul-sountracked parties in the 1960s, not two hours of a strident, manipulative (and very well-meaning) history lesson.