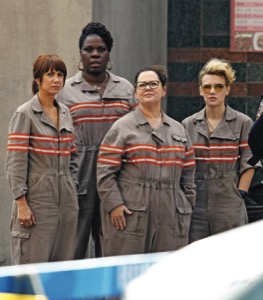 In one of the worst examples of modern panicky emasculation, small-minded men who spend their lives complaining on the Internet had a collective meltdown when it was announced that Ghostbusters would be remade with women playing the roles originated in 1984 by Bill Murray, Dan Aykroyd, Harold Ramis and Ernie Hudson. For some reason, they claimed that this new film – to star Melissa McCarthy, Kristen Wiig, Kate McKinnon and Leslie Jones and directed by Paul Feig – would somehow destroy their childhood memories and usher in some sort of feminist autocracy that would bring about mass castration and, eventually, the End Times. I had planned on buying tickets simply to irritate the cellar-dwelling Twitter trolls. And while the movie is not as great an experience as the original, it’s delightful, silly summer entertainment.

Wiig plays Erin Gilbert, who is about to earn tenure in the Department of Physics at Columbia University. When it’s discovered that she co-wrote a book on the paranormal with her old friend Abby Yates (McCarthy) but also actually believes in ghosts, she’s fired. She reluctantly joins Abby, her brilliant engineer Jillian Holtzmann (McKinnon), and eventually a streetwise New York subway worker named Patty Tolan (Leslie Jones) to form the Ghostbusters and investigate the rising spectral activity in New York.

The plotting isn’t as interesting as the original, which involved spectacular supporting performances by Sigourney Weaver and Rick Moranis, and neither Wiig nor McCarthy shine in family friendly fare as much they do in their R-rated hits like Bridesmaids, Skeleton Twins and Spy. But McKinnon’s edgy, queer, utterly bizarre Holtzmann steals almost every one of her scenes, and Jones’s Patty, who is grounded, smart and infectiously cheerful, is the most fully realized character she’s ever played. Both the action and effects are well handled, even if many of the ghosts and scares are homages to the original film. What is different is that the new Ghostbusters is an action comedy about capable, tough women who are focused on their friendships and saving the day – not on men saving, loving or bettering them. A feminist summer blockbuster? More please.