“I was calling it the feather duster.” 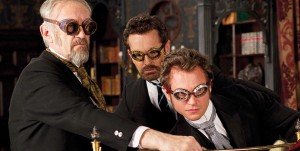 Perhaps you remember that in old movies, a woman would be screaming and crying in rage or anguish, and oftentimes, a nearby man would say, “She’s hysterical!” And he might slap her, or, if it were available, inject her with a sedative. Hysteria used to be a medical diagnosis, and it was thought that the only cure for the women who suffered its most extreme forms was a full hysterectomy – the surgical removal of the uterus. What hysteria actually was a diagnosis for was not terribly exact, but it was terribly sexist. In the words of Charlotte Dalrymple – Maggie Gyllenhaal’s character in the charming period comedy about the invention of the vibrator Hysteria – hysteria is “a catch-all diagnosis for women without opportunity forced to spend their lives tending to domestic chores and selfish, prudish husbands who are unwilling or unable to make love to them properly or often enough.”

Charlotte has such a specific opinion about hysteria partly because she is a whip smart proto-feminist and partly because her father is Dr. Robert Dalrymple (Jonathan Pryce), the leading medical specialist in hysteria in Victorian London. His treatment, as it turns, consists mostly of manual stimulation of his patients’ genitals until they reach “hysterical paroxysm,” which is just another term for what we call orgasm. His practice becomes much more successful after he hires Dr. Mortimer Granville (Hugh Dancy), who is young and handsome and who has had a hard time keeping a job because he believes in revolutionary modern ideas such as germ theory.

There is only a grain of truth to this story: Mortimer Granville did invent the vibrator, but he was not involved in treating hysteria, and he never wanted his device to be used for the pleasure of women. Director Tanya Wexler and screenwriters Stephen and Jonah Lisa Dyer have taken this historical footnote and surrounded it with both a romantic comedy and a feminist morality tale. Charlotte is a character who exists to embody the feminist critique of hysteria, which was practically an academic cottage industry in the 1980s and 1990s. Mortimer is a paragon of modern medicine, and Dr. Dalrymple represents Victorian-era misogyny and elitism. Happily, these obvious symbols are written and manipulated so well that the movie is only occasionally didactic; it’s mostly a very funny, though not hysterical, comedy of manners.

Gyllenhaal, as always, has an easy, yet fiery charisma, and what could have been an overly strident role is instead dynamic, droll, and endearing. Dancy, who is a better-looking and more versatile Hugh Grant, is the actual lead of the film, and he has a great nebbishy wit. Pryce is perfect cast as the comic villain. Everett is also well cast, and he delivers his quips with his trademark sly twinkle. However, his plastic surgery is distracting; his face doesn’t move. Botox and facial implants may not have been the best uses of modern science.