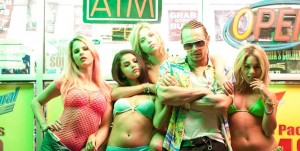 I saw Spring Breakers, Harmony Korine’s perverse exploitation art film, with five bears and a couple hundred teen-agers who thought they were seeing a Tarentino-fied Where the Boys Are. That said, I doubt any of those kids have ever heard of Where the Boys Are, the 1960 film starring George Hamilton and Yvette Mimieux, but they definitely know the genre: college girls go to Florida on spring break and hilarity ensues. It’s not the kids’ fault they were wrong. The trailer for Spring Breakers makes it seem to exist in that somewhat beloved genre, just with added guns and a sleazy white rapper played by James Franco. The gays I went to see Spring Breakers with knew that they were going to see something else; we knew that Harmony Korine wrote Kids and wrote and directed Gummo, two of the most perversely exploitative art films of the 1990s. We were actually hoping to be horrified by the wrongness of the movie, and the kids in theater were simply surprised by how horrifying, pornographic, disturbing, and weirdly funny Spring Breakers is. To say that the movie is bad is true, but that’s too straightforward. It’s too effective – too deliberately funny, titillating, and discomfiting – to be just be bad. It’s also a little bit brilliant.

The plot begins simply (and clichéd) enough: On a nameless college campus, four girls desperately want to go to Florida for spring break, but they don’t have enough money. Faith (Selena Gomez) is a naive, depressive Christian who wants to break free, while Candy (Venessa Hudgens) and Brit (Ashley Benson), described as a having “demon blood” by one of Faith’s friends (one of two lines by Glee’s Heather Morris), just want to party and have sex. And Cotty (Rachel Korine, Harmony’s wife) is along for the ride. Literally. When Candy and Brit decide to rob the Chicken Shack, using only a small sledgehammer and water guns, Cotty drives the getaway car, which by the way is an El Camino stolen from one of their professors. With a pile of ill-gotten cash, they take a bus to St. Petersburg, where they join the party already in progress. And what a party. Keg stands, beer bongs, cocaine snorted off of naked girls bellies. Our heroines love it and say to each other that they wish it could be like this forever. But eventually, forever comes, and they all get arrested. Up to this point, the movie feels simply pornographic, massses of naked bodies, gallons of liquor, tons of drugs, and no characterization or acting to be seen.

And then Alien shows up. James Franco, in long, scraggly corn-rows and sporting a gold grill in his mouth and silly, wannabe-player tattoos all over his body, plays the rapper-gangster who has a house full of $50 bills, baggies of cocaine, blue Kool-Aid, and guns, guns, guns. He bails our girls out of jail, and suddenly the movie leaves the spring break genre and becomes a weird mash-up of Scarface and Faster Pussycat, Kill, Kill. With a Britney Spears and Skrillex soundtrack. Franco is so creepy, so funny, and so balls-out involved in his character that whatever occasionally slow-moving absurdity Korine has his characters involved in becomes entertaining. I mean, hello, at one point he fellates two pistols at once. It’s fantastic.

I’m convinced that every great line uttered by Franco was ad-libbed because almost all of the other dialogue is stolid and often laughably shallow. Korine is a visual artist of great talent, and almost every image in the film could be framed and hung at gallery in Soho. But a writer he is not. The movie is raggedly structured, full of strangely repeated images and lines, and thematically incoherent. I couldn’t tell if it was meant to be moralistic or nihilistic. No wonder all of those kids in the theater were confused.