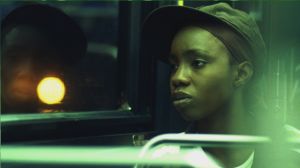 This review isn’t going to run until next week (if it runs), but the movie is out now, and I want y’all to see it.

As it turns out, 2011 was a really great year for independent queer cinema. I’ve mentioned multiple times over the last few months my love for Weekend, one of best gay movies ever made. And now San Diego is getting to see Pariah, one of the best lesbian films I’ve ever seen, which has won awards at Sundance and other festivals and is nominated for two Independent Spirit Awards. That Focus Features, the distribution company that puts out such highbrow star-vehicles like Brokeback Mountain and Tinker, Tailor, Solider, Spy, would get behind a gritty first feature with virtually unknown actors and a lengthy scene about a strap-on dildo is testament to how affecting Pariah is. They know that the word-of-mouth on this movie will be great. Let me add to the praise.

The title of the film refers to someone who is an outcast, usually someone stigmatized but sometimes someone who just chooses to live outside of the community in some way. The most obvious pariah in the film is Alike (pronounced uh – lee – kay, and played by Adepero Oduye), a 17-year-old African-American lesbian who is closeted to – if suspected by – her family, but a bit too green and unsure of herself to comfortably fit in with the young lesbian social world where Alike’s butch best friend Laura (Pernell Walker) is so at ease. But Laura is a pariah, too, since she has been kicked out her home by her disapproving mother and subsequently quit school to make enough money to live with her sister. And Alike’s mother, Audrey (Kim Wayans), is a pariah in her home, where she has alienated both her husband and her oldest daughter, and at work, where she is visibly prickly at the thought of interacting with her more boisterous co-workers.

While the title is apt, I found it a bit too extreme. When I think of pariahs, I imagine ragged lepers or mentally ill hermits. And as hard as these women have it, their plights don’t quite compare; there is too much love and hope and humor in the lives of the characters Dee Brees has created in her flawless script. Even in the most intense conflict, between Audrey and Alike, is based on motherly love, even if the mother is damaged and her priorities are disordered. Audrey wants Alike to have the perfect life, so she makes her husband Arthur (Charles Parnell) work overtime as a police officer to pay for the house in Fort Green and the designer clothes for Alike and her sister. This also means that Alike needs to be the perfect girl, wearing pretty clothes, dating boys, and not hanging out with Laura. Audrey is the antagonist of the film, but she is not a monster. She simply does not have the ability to deal with what life has brought her.

Alike, however, has the self-possession of the smartest and coolest girl in school. She is nervous about finding a girlfriend and playing into the butch-femme role-playing that seems to govern the lesbian culture she and Laura hang out in. But her bravery, not only in her poetry but in her willingness to give up everything she knows for freedom, is inspiring. Oduye has a rich role to play, and she does it with naturalistic, nervous toughness that reminded me, at times, of both Claire Danes in My So Called Life and Michelle Rodriguez in Girlfight. As Laura, Walker is similarly striking, effortlessly switching from wise to scared, sensitive to rough. And Wayans, known best for her insane impersonation of Whitney Houston on In Living Color 20 years ago, gives the kind of fraught but controlled performance that in a bigger movie might earn her an Oscar nomination. You can only achieve these sorts of performances with a great director, and Brees proves that she is just that.