It’ll give you a rush 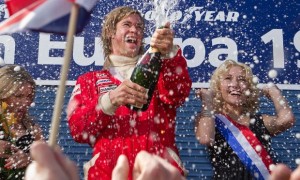 I’m sure some evolutionary psychologist has come up with a theory about why so many men get so much pleasure out of driving exceedingly fast. Speed, whether on foot or on a horse or in a mechanical contraption, makes us feel invincible, making us feel either that we can out run any enemy or catch any sort of prey. And being faster than someone else means that we are probably fitter, and more attractive to whoever we might want to have sex with. This need for speed gets at something very primal inside our heads; that must be one of the reasons that movies about speeding, focused on races and chases, are made in order to increase your heartbeat, to give you a rush. And most of the movies are not very good.  Ron Howard’s rather obviously named Rush is not one of those, however. It’s a good, but by no means great, movie about racing cars, chasing women, and the costs and benefits of rivalry.

Based on the famed 1976 Formula 1 competition between James Hunt (Chris Hemsworth) and Niki Lauda (Daniel Brühl), Rush traces the two very different men from their early days driving lesser Formula 3 cars to the pinnacle of car racing, the Formula One World Championship. Hunt was a gorgeous blond British bad boy who partied as hard as he drove, while Lauda was an analytic, methodical, and slightly rat-faced Austrian. They both became race car drivers over the fervent opposition of their families, and they both were fierce competitors. Hunt married supermodel Suzy Miller (Olivia Wilde) who left him for Richard Burton in a massive worldwide scandal, while Lauda’s marriage to Marlene (Alexandra Maria Lara) was quiet and only vaguely romantic. In Peter Morgan’s screenplay, Hunt’s desire to win seems rooted in an untamed id and Lauda’s out of a need for perfection, but both of them are driven by the other, partly because of how distasteful they find each other’s motivations to be.

In 1976, Lauda was defending his world championship and Hunt was determined to best him. The championship was based on points earned by placing in a series of grand prix races around the world. In the beginning, Lauda kept coming in first and Hunt in second, but after Lauda was horribly burned in a fiery, nearly fatal crash at the race in Germany, Hunt was able to catch up. Lauda returned to the track astonishingly quickly, only missing two races that Hunt won, because, according to the film, watching Hunt win enraged him so much.

This plotting is basically perfect for a sports movie, and it some ways it begs to be directed in the style of a Fast & Furious sequel or by devotee of Tony Scott, who made the silly Tom Cruise NASCAR movie Days of Thunder. But Ron Howard, despite being too concerned with easily pleasing his audience, is both artful and ambitious. The racing sequences are where Howard, if not taking the filming of car racing to a new level, turns the movie into audio-visual amphetamine. With quick close-ups of the over-working engines, cameras clamped to the cars’ wings, and Oscar-worthy sound design and editing, Howard made the races thrilling and gorgeous.

The dramatic scenes, whether it is Hunt and Miller’s nasty fighting or Lauda’s grueling recovery from his burns or Hunt and Lauda’s trash-talking, are effective and elegantly staged. But they are not particularly interesting. Brühl is a smart character actor, and he makes a somewhat boring character much more fascinating than he deserves to be. But Hemsworth, as charismatic and handsome as he is, is not a sensitive enough actor to make Hunt more than stereotypical playboy. And the women are underwritten. They only make sense as objects of primal needs. Real women are much more complicated.