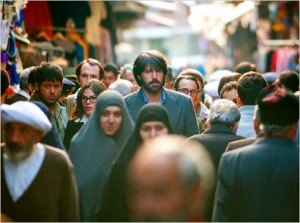 My current prediction is that Argo will win the Academy Award for Best Picture.

The thing about making movies based on true stories is that it’s hard to keep them suspenseful. This is especially so when the story is so famous, and everything but the smaller details are rather well known.

Ben Affleck’s fantastic new film Argo is based on such an event: The Iran hostage crisis from 1979 to 1981, in which 52 employees of the American embassy in Iran were held captive after the United States government foolishly gave asylum to the country’s loathsome, brutal king. Argofocuses on the six employees who escaped, hid at the Canadian ambassador’s house, and were smuggled home to safety and a massive hero’s welcome.

I am aware that Americans are rather terrible at history, but if you were alive during this event, you remember it. It brought down Jimmy Carter and is the event that has governed American Middle East policy since then. Iran hates us for all sorts of reasons, some justified (as Argo points out), but our hatred of Iran stems from the Iran hostage crisis. So, making a thriller about it and basing the thrill on whether or not any of the hostages are going to die is a tall order.

That (I need to say “Spoiler alert!”) right now saddens me, but some of you who weren’t alive still didn’t pay attention in high school history. You should know none of them died. That Affleck and his screenwriter Chris Terrio can make this into a white knuckle thriller is a testament to how great their work is in Argo.

What makes Argo more than just a typical spy thriller is the way that the CIAmanaged to extract the six escapees. Agent Tony Mendez (Affleck) flew into Tehran pretending to be a film producer scouting locations, and he flew out with the six escapees posing as his production crew. Insane, yes. As Mendez’ boss (Bryan Cranston) tells the CIA director, “This is the best bad idea we have.”

In order for it to work, the cover had to be impeccable. So, not only did these terrified, incredulous foreign service bureaucrats (played by Tate Donovan, Clea DuVall, Scoot McNairy, among others) have to act like Hollywood professionals, but actual Hollywood professionals had to fabricate an entire film production. For that, the CIA hired the cynical Oscar-winning make-up artist John Chambers (John Goodman) and, in the film only, a fictional, old school, Robert-Evans-meets-Carl-Reiner producer named Lester Siegel (Alan Arkin, going for his second Oscar), who coins the film’s catchphrase, “Argo fuck yourself.” Their scenes lovingly mock Hollywood, and they’re nearly as funny as similar scenes in the great political satire Wag the Dog.

The merging of the satirical comedy about Hollywood, the paranoid suspense in Iran, and the wonkish, but often very funny drama of Washington, D.C. is seamlessly handled in Terrio’s masterful script and Affleck’s direction of himself, his all-star cast and the complex action. The common factor in all three locales is Affleck, who is tense and a bit mopey in his acting, but this near blankness helps him make his more exciting actors and characters – like Cranston, Arkin, and McNairy – stand out, shine, crackle and control the emotions in their scenes.

Most of the scenes Affleck is not in, he’s even more clearly in control as the director. The opening 15 minutes, for instance, focuses solely on the takeover of the embassy in Iran, and it features the same sort of white-knuckle tension that made Affleck’s previous film The Town make everyone say, “Oh, wait, it turns out Ben Affleck is a director.” Because he is, and he’s made one of the best movies of the year.