It’s the end of the world, and I don’t feel fine 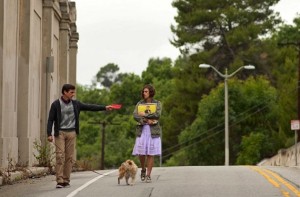 Not my idea of a good time. Here’s the LGBT Weekly link.

When I’m under the weather – when I’m home with a cold or just filled with ennui – I like to watch romantic comedies. However, there are a few things I can’t take in a romantic comedy. Don’t bring me down. I don’t want disease, death or injustice. I can take the lovers not ending up together, but I can’t take killing them. Not in acomedy.

So, for Pete’s sake, don’t end the world in a romantic comedy.

But this is the entire premise of Seeking a Friend for the End of the World, Lorene Scafaria’s new movie starring Steve Carell and Keira Knightly. I’m not sure what would give her the idea to set her movie in the last three weeks before an asteroid arrives and destroys all of humanity; and I’m not sure why she’d set a romantic comedy then; and I’m really not sure why a studio would produce such a movie.

But hating something for its premise isn’t fair. So, let’s take it on its merits.

Steve Carell plays Dodge, an insurance salesman (irony alert!) whose wife leaves him shortly after the end of the world is announced. Unlike his friends who are using Armageddon as an excuse to do all of the things normalcy wouldn’t allow – sex, drugs, food, adultery – Dodge is more like the people who are depressed by the end. But when his downstairs neighbor Penny (Knightley) gives him a stack of misdirected mail, Dodge discovers that the love of his life, as opposed to his ex-wife, still loves him and he decides to find her before it’s all over. After some plot machinations, Penny and Dodge set off together – Dodge to find his ex-girlfriend and Penny to find a way to England, so she can be with her family when the sky falls.

Penny is enormously charming and witty and fun, and since she’s played by Keira Knightley, quite stunning. Steve Carell, who is about 20 years older and looks it, is playing a passive, dull mope, and while he’s nice, Penny could have found someone a little more fun for the end of the world. We don’t meet anyone like that, however, even though many of the bit parts are very well done. Connie Britton, Rob Corddry, Patton Oswalt and TJ Miller each have a few minutes to make the audience laugh with snark and witticisms. And then we remember what’s actually going on.

When Scafaria is making us laugh, the movie is fun. The first half is mostly end of the world jokes, but the second half is a road-trip movie. The transition makes plot sense, but the tone shifts from satirical to sentimental, and then it just gets depressing. Or, rather, it got depressing for me. I can imagine that what happens in the last ten minutes could seem enormously romantic for some viewers. But I didn’t believe Penny and Dodge would ever have been together without disaster striking, and I am too much a child of the Cold War to find the ultimate doom funny, let alone a great setting for romance. So, at the end I wasn’t swooning; I just felt sick.