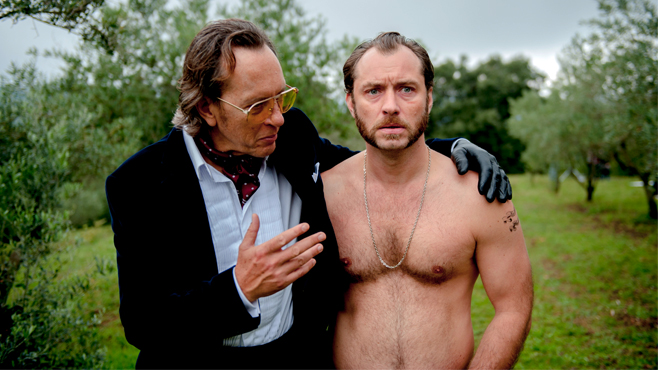 The first two minutes of Dom Hemingway is perhaps the most thrilling film scene I’ve seen in several months. As the titular character, Jude Law – beefed up, with mutton chops and his natural receding hairline – stands naked and sweaty, only his head and torso visible for those two minutes while he gives a fierce, bombastic, shockingly poetic monologue about the wondrous nature of his cock. Two minutes is not a very long time in our real world, but on film, it can seem like an eternity, but not here. Law becomes more ecstatic as he comes closer to orgasm; this ode to his cock explodes as a fellow prison inmate is giving him a blowjob. It’s fabulous (if filthy) writing and a fabulous performance, and when Law is peeling the paint off the walls with his intense recital of writer-director Richard Shepard’s monologues, the film is mesmerizing. But the plot does not live up to the promise of the many great individual scenes.

Dom is a British career criminal who is released from prison shortly after his cock talk. He had refused to testify against his boss, so instead of a plea-bargained three years, he served 12. During that time, his wife left him for another man and then died of cancer. His daughter grew up and has erased him from her life. Despite the joy of his released, he is very, very angry, and he hopes this disaster will be tempered by finally receiving not just payment for the safe cracking that got him sent to jail but also a deserved gift for his time and troubles. So, after beating his ex-wife’s new husband to a pulp and then drinking and whoring for three days, he and his best friend — the effete, constantly eyebrow-raised Dickie (Richard E. Grant, most recently of Girls) – take the train to the south of France to meet Dom’s former boss, Mr. Fontaine (Demian Bichir, Oscar nominated for A Better Life).

The visit both goes much worse and much better and then much worse than anyone could have expected. Afterwards, Dom needs the help of his daughter Evelyn (Emilia Clarke, the Khalisi in Game of Thrones), who has married and had a child with Senegalese man named Hugh (Nathan Stewart-Jarrett, from the British sci-fi show Misfits). She is not impressed with her father, who appears drunk and bloody on her doorstep. Dom is often drunk and bloody, and parenting is not one of Dom’s natural gifts, unlike safe-cracking. He’s a bit rusty with that, too, and the gangster son (Jumayn Hunter) of one of his old enemies decides to use that rust to screw Dom over.

As you can see, the plot is very complex, and that usually that can work in a novel, but rarely on screen. (I was actually surprised that Shepard didn’t adapt Dom Hemingway from a book.) In a film, the constant turns and misdirections make for a convoluted story. It’s is also a bit tonally confusing. The bloody, somewhat slapstick crime story feels like it came from a Guy Ritchie film like Lock, Stock, and Two Smoking Barrels, while the family drama about regret and redemption seem to have been culled from something like Love Actually. Merged together, the film doesn’t jell. That said, Shepard writes coke and alcohol-fueled monologues as well as he directs tense and hilarious testosterone-soaked scenes. Even if he doesn’t pull it all together as well as, say, Quentin Tarentino and Danny Boyle can with similar material, Dom Hemingway is a lot fun.

Most of this, of course, is because Jude Law gives his best performance in more than ten years and the funniest of his career. He put on thirty pounds (drinking ten cokes a day), and it looks very, very good on his familiar lither frame. Luckily for us, he’s naked for a couple rather long scenes. But it’s his spitting, throbbing, screaming explosion of a performance that really matters and makes Dom Hemingway well worth watching.