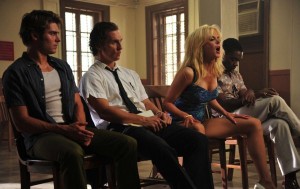 Oh, my. What an insane movie.

I was not a fan of the Academy Award-winning Precious, because it took Murphy’s Law to beyond what seemed possible: Precious’ suffering was never-ending, always worsening, and virtually meaningless. Director Lee Daniels never flinched from showing us the worst of the worst of the everyday physical and emotional violence suffered by the obese, abused, HIV+ teenage Precious. More so than any film I have ever seen, Precious felt like poverty pornography.

That said, the skill of filmmaking could not be denied. Daniels can make beauty out of both mundane and grotesque images, and he can elicit the most surprising, the most entrancing performances, from Gabrielle Sibide and Monique in Precious to Nicole Kidman and Zac Efron in his follow-up, The Paperboy, a very different movie that is just as relentlessly visceral. It’s a deeply flawed movie, perverse in many ways and retrograde in others, but through most of it, I was still rather entertained.

Based on Peter Dexter’s 1995 novel of the same name, The Paperboy takes place in 1969 in a small, hot, humid Florida town and is about the effort of Miami journalists Ward Jansen and Yardley Acheman (Matthew McConaughey and David Oyelowo, respectively), Ward’s younger brother Jack (Efron), and saucy, trashy waitress Charlotte Bless (Kidman) to overturn the conviction of Hillary Van Wetter (John Cusack), who is on death row for killing a corrupt sheriff.

Ward grew up in the town, where Jack still lives with their father, the editor of the local paper. A Pulitzer winner, Jack is determined to right the wrong done to Hillary. Yardley, Jack’s writing partner, is a black Englishman with a heavy and large chip on his shoulder. Charlotte is their main source; she has fallen in love with Hillary by mail, for unclear reasons. Young Jack promptly falls in love with her, despite her being, quite clearly, bad news in so many ways.

The plot is ostensibly a mystery about whether or not Hillary actually committed the murder, but he is such a revolting beast of a man and the mysteriousness of his conviction so uninteresting (it involves stealing sod). The mystery is just a backdrop in front of which we get to watch the psychosexual politicking of Ward, Yardley, Charlotte and Jack.

Yes, things like racism, classism, justice and ethics are indicated to be themes, but Daniels’ only gestures at them, seemingly much more interested in showing up Efron dancing in his underwear (which is a delightful, if totally unnecessarily pervy sight to see) and or making Kidman express herself through bodily functions and onanistic orgasms.

Daniels puts McConaughey through the ringer, too, making him do things that no McConaughey character has ever done, and I’m not just referring to Ward’s homosexuality. Unlike Kidman, who I respect for going to the very weird and terrifying places she went, McConaughey doesn’t make himself any more interesting as an actor.

It doesn’t help that he’s mostly an action figure for Daniels and Dexter to move around. His character is an unfortunate clichéd throwback to the kind of sick and doomed homosexual so common in movies like Suddenly Last Summer orCruising. Each revelation about Ward elicited just another eye roll from me.

Yes, the movie is meant to be pulpy noir, but within this politically incorrect genre, Daniels and Dexter make a lot of progressive statements about race – but their ideas about sexuality, both homo and hetero, are trapped in 1969.