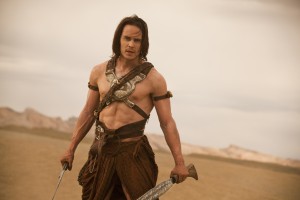 It doesn’t look like my review of John Carter ran in this week’s issue, so here it is in its entirety. Make your weekend movie choice wisely, my friends.

When you cast someone’s whose last name is Kitsch in a bound-to-be-cheesy sci-fi action film, you’re begging for a review that says that the movie is “kitschy.” And that would be perfect description of John Carter, since the film is “a worthless imitation of art of recognized value.” (Thank you, Wikipedia, for that apt definition.) In some ways, I thought I was watching some weird mash-up of two other kitsch touchstones, Flash Gordon and Stargate. Yet, I think the director Andrew Stanton, who gave us the Oscar-winning Wall-E, and the film’s original screenwriter Michael Chabon, who won a Pulitzer for The Amazing Adventures of Kavalier & Clay, were trying for populist high art, something along the lines of Avatar or Star Wars. But the film, despite its technical achievements and good, silly fun, is just two hours and 12 minutes of kitsch.

John Carter is based on A Princess of Mars, the 100-year-old novel that was the first of Edgar Rice Burrough’s enormously popular Barsoom novels. In these books, the people who live on Mars call their planet Barsoom, and John Carter is a Civil War veteran from Virginia who is mysteriously transported from a cave in Arizona to the dusty deserts of the red planet, where he falls in love with a Martian princess, befriends some green tribesmen, and gets into a lot of fights. The eleven novels in the series were credited as major influences of Ray Bradbury, Arthur C. Clarke, Carl Sagan, Michael Crichton, and even the work of NASA. Burroughs, who also gave us Tarzan, is arguably the greatest pulp fiction writer of the 20th century. While his work was certainly not kitsch, and it was certainly wildly imaginative, it was certainly not high art. So maybe John Carter is an apt representation of Burroughs’ work.

After a brief prologue on Mars, the film begins with John Carter (Taylor Kitsch) dying at a young age and leaving his massive estate to his nephew, Edgar Rice Burroughs. Among John’s belongings is a diary, which tells the story of John’s accidental teleportation from a strange cave to Barsoom, where he is at first taken captive by the Tharks, a tribe of giant, six-armed, two-tusked green men. John befriends both the tribe’s chief Tars (Willem Defoe) and his daughter Sola (Samantha Morton) before he inserts himself into a battle between warring humanoid Martians that occurs in the skies over the Tharks’ city. John rescues Princess Dejah Thoris (Lynn Collins, playing a feminist revision of Burroughs’ damsel in distress) of the city of Helium from the evil Sab Than of the city Zodanga, and, of course, Carter and Dejah fall in love. Sab Than has been given a strange, all-powerful blue zapper from some god-like beings and is out to destroy Helium – unless Deja marries him. There are sword fights, explosions, impressive special effects, a little romance, and a dialogue as wooden as anything James Cameron has ever written.

It should also be noted that on Mars, all humans speak with English accents. And they’re all played by actors best known for their roles on HBO shows like Rome, The Wire, and True Blood. And they all do the worst work of their careers, which isn’t terribly surprising since they’re acting on green screens and speaking words that would sound absurd coming out of Meryl Streep’s and Laurence Olivier’s mouths. Kitsch, in the first of his two mega-budget sci-fi action films that arrive this spring (the next is Battleship) and mark his transition from Friday Night Lights brooder to hopeful movie star, is fine – handsome, fierce, charming. But he is not very much of any of these things, and like Collins and the whole movie, while not worthless,  he is mostly forgettable.