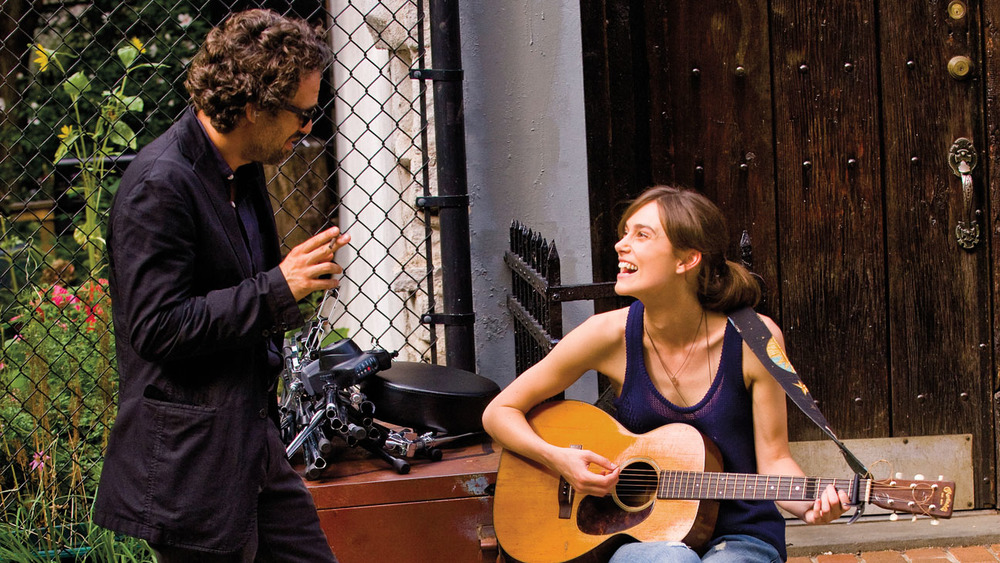 In the first scene of Begin Again, a blond Brit named Steve (James Corden) finishes his song at an open mic night in New York’s Lower East Side and coaxes his friend Greta (Keira Knightley) onto stage. She reluctantly, almost begrudgingly sings “A Step You Can’t Take Back,” which she claims is new, and the audience barely notices. There is some polite applause, which Greta rolls her eyes at. She’s already down because, as we quickly find out, she has just broken up with a boyfriend of five years, an up-and-coming rock star (Dave, played by Adam Levine). However, in the middle of the crowd is an enrapt, drunk, mussed man (Dan, played by Mark Ruffalo) in his 40s, who is in awe. Neither the audience in the club nor in the movie theater knows why; the latter audience finds out ten minutes later when we see the scene from Dan’s perspective. As he watches Greta’s perform, he imagines other instruments joining in, all played by invisible musicians. Suddenly, the song soars. And we get a lesson in music producing, which is what Dan does for a living. Or had. He was fired that morning.

With this set up, the rest of the plot shouldn’t be too hard to predict. Dan persuades Greta to work with him. Dan needs to be redeemed as a producer after a drunken, depressed crash brought on by his divorce from Miriam (Catherine Keener) – which means he needs to be redeemed as a husband and father to Violet (Hailee Steinfeld), too. Greta needs to prove herself as a songwriter and performer after being relegated to being “Dave’s girlfriend,” particularly after Dave cheated on her with a record company assistant. Without any money, Dan and Greta decide to record an album entirely outside, from alley ways to rooftops. They recruit a band, pay them on the cheap, and start recording one delightful song after another. Meanwhile, they start developing a powerful, possibly romantic, friendship and work to repair their other relationships.

The plot of Begin Again is slight, using a few of the clichés of the let’s-put-on-a-show! genre and focusing on a rather simple redemption narrative in order to string together a bunch of beautifully directed musical performances. Writer-director John Carney’s last major feature, the magical Oscar-winning Once, had an even thinner story to link an Irish love story. That story was emotionally much more powerful, possibly because it snuck up on you, acted as it was by utter unknowns. Ruffalo, Knightley, Keener, and Levine are the opposite: They are huge stars and are all a bit distracting at first. Can Knightley Sing? Can Levine, an actual rock star, act? Is Ruffalo going to do that disheveled loser thing for the whole movie?

Knightley is always good, utterly convincing in both period dramas like Atonement and contemporary comedies like Bend it like Beckham. And she’s stunningly beautiful, as delicate as blown glass, and she has a sturdy charisma that standard ingénues tend to lack. With Begin Again, we discover she can also sing, with a voice something like a cross between Suzanne Vega and Lucinda Williams. Combining her emotional expressiveness and her voice makes for powerful musical numbers, particularly when she sings to Dave’s voicemail with “Like a Fool” or when she gleefully finishes the album accompanied by Violet’s guitar with “Tell Me If You Wanna Go Home.” Levine, who acts with smooth naturalism, gets the final song, however, singing the Greta-penned “Lost Stars” as a grand and gorgeous audition for the Oscars. (“Falling Slowly” from Once won Best Original Song in 2008.)

Ruffalo doesn’t sing in the movie; during the musical numbers that he is producing, he is mostly a conductor and infectious cheerleader. Dan is a stereotype of an aging music executive – his theme song is probably LCD Soundsystem’s “I’m Losing My Edge” – and Ruffalo’s performance is reminiscent of the early disheveled stoner roles that made him a star. As Dan and Greta grow closer, he becomes more believable. By the end, however, the film belongs to Knightley and Greta, who refuses to compromise, in music and in love.