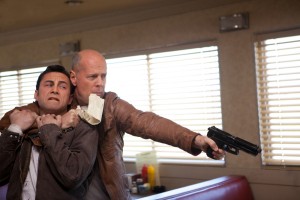 Fun and exciting. Just don’t think about it too hard. Unfortunately, I had to.

I love the idea of time travel. I fantasize about it a great deal: going back and stopping 9/11, going forward and finding out the right lottery numbers, visiting ancient Greece to see the Parthenon in its original form, or to 1970s San Francisco to visit pre-AIDS Castro. I’m always excited by time travel stories, from those great Star Trek episodes, to HG Wells’ The Time Machine, even to dorky shows like Quantum Leap. But when the time travel involves people visiting themselves in the past and trying to fix the future, things go awry, because the paradoxes start piling up. I either get annoyed or I have to force myself to ignore the annoyances. I had to do this with the Terminator franchise and with Heroes; if I thought about it too much, I could poke holes in the plot and my enjoyment would stutter. This is how I felt while watching Looper, the brainy, mostly thrilling new time travel thriller starring Joseph Gordon-Levitt as Bruce Willis’s younger self.

In 2074, mobsters use time machines to send their enemies 30 years back in time to be killed and disposed of by loopers. Apparently, getting rid of murder victims is hard in the 2070s. Joe (Gordon-Levitt) is one such looper. He lives in Kansas in post-economic collapse United States (where 10% of the population have telekinesis), and he is banking his money to escape to France. Suddenly, more and more loopers are “closing the loop,” the phrase for being forced to kill their 30-years-older selves in a violent method of contract fulfillment. But when Joe’s older self (Willis) arrives, Old Joe manages to escape. Young Joe then has to track down Old Joe while also being chased by the current era’s mobsters in charge of the whole looping outfit. But Old Joe is hunting down the little boys who possibly are going to become a man known as the Rainmaker, who is responsible for not only the whole rash of loop closings in the future but also the murder of Old Joe’s wife. The mother of one of the potential Rainmakers is a farmer named Sarah, played by Emily Blunt.

The plot has all sorts of logical holes. The most irksome to me is that the looper has to kill the person in 2044. Why not kill the guy in 2074 and just send his body back to 2044 for disposal? Or even better, just send the body back a few million years, maybe as food for a saber-toothed tiger. But then, of course, that would ruin the plot and the drama, which is centered on a middle-aged man trying to convince his brash, younger self to think about his future. In their one great scene together, Old Joe seems to recognize the problem writer-director Rian Johnson has created. He snaps at Young Joe, “I don’t want to talk about time travel because if we start talking about it then we’re going to be here all day talking about it, making diagrams with straws.” Well, yes.

But if you ignore that and the straw diagrams, you just focus on the practical and moral crisis of the Joes, Sarah, and her son Cid, then you’ll most likely find yourself immersed in one of the best original science fiction films of the last few years. Johnson’s script, despite its time travelling logic, is complex but taut, managing to hit major themes about violence and loyalty and justice with great economy and with little needless, nerdy exposition. Johnson uses few special effects to create a fully realized vision of possible dystopian future, and his direction of his actors is similarly focused and unflashy.

Gordon-Levitt, despite being second billed to Willis, is the star, doing both a finely honed imitation (physically and affectively) of a young Willis and a great turn as a sexy, noir hitman full of pathos. (Johnson directed him as a teen-aged noir detective in Brick.) As he has shown in Inception and The Dark Knight Rises, Gordon-Levitt is the current thinking man’s action hero. Willis is a little less believable as an older version of Gordon-Levitt’s Joe, but when he picks up a gun and starts going Die Hard on the bad guys, I was reminded of why he has had such star power. Blunt is, as usual, is better than her role; she makes the most out of what is essentially connective tissue for the plot. But what she connects us to is Pierce Gagnon, who is only five but who plays Cid with the creepy and articulate intensity. It’s hard to know if his performance is produced by an innate gift or by Johnson’s coaxing. Either way, he steals his scenes from everyone else in them. With luck, his future will be exceptional.