Not very weird, or fun 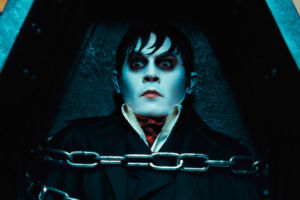 I have never seen an episode of Dark Shadows, the gothic supernatural soap opera that ran on ABC from 1966 to 1971 on which Tim Burton and Johnny Depp’s new movie is based. Based on what I’ve read about it, however, I’m pretty sure I’d like it: Vampires. Secrets. Magic. Melodrama. High Camp. These are a few of my favorite things. The guys who gave us Edward Scissorhands, Ed Wood, and Sweeney Todd should be able to make the most of that material, I thought. You’d think. But as I sat through the screening of the moviefied Dark Shadows, I realized that Burton and Depp hadn’t tried to make another weird and smart and daring movie like Ed Wood. Instead, they had tried for a summer blockbuster. And I’d be surprised if this occasionally amusing but mostly incoherent mishmash of gothic horror, domestic comedy, and fantasy action connects with audiences beyond those who are easily bamboozled by the studio’s relentless, omnipresent marketing of the movie.

The marketing team did get something right: if you’re only focusing on Johnny Depp, the movie is pretty fun to sit through. He plays Barnabas Collins, the heir to a fishing fortune who was turned into a vampire in the 1790s by a witch named Angelique (a slithering Eva Green), whose affections he spurned. When that still didn’t drive him into her arms, she had him buried “alive” by an angry mob. Then, 180 years later, his coffin is discovered and opened, and Barnabas is freed. He returns to his old homestead, where he discovers his family’s fishing business has been usurped by the still-alive Angelique. He vows to bring the family (led by a sadly underused Michelle Pfeiffer) back to glory. Unfortunately, Barnabas is a vampire who occasionally gets hungry, the 1970s is very confusing to someone raised just after the Revolutionary War, Angelique is an insane and seemingly omnipotent sorceress, and the present-day Collins family is less than functional. Occasionally, hilarity ensues. And occasionally, stuff explodes and people turn into werewolves.

Depp plays Barnabas as a cross between Edward Scissorhands and Ed Wood. He even fans his pointy fingers in a quote of his greatest role and Burton’s best film, and he jauntily commands a room, raising an ironic eyebrow and giving a sexy, sly smile, not unlike his performance as the greatest bad director in history. Depp is the star of every scene, with even the great Pfieffer and the nearly as great Helena Bonham Carter, playing the drunk Dr. Hoffman, orbiting him like pretty little asteroids. Carter has some of the best lines of the film – “Every year I get half as pretty and twice as drunk” – but in a film overpopulated with great actors like Jackie Earl Haley, Jonny Lee Miller, and Chloë Grace Moritz, she gets lost in the crowd.

But they all get lost in Burton’s overzealous art direction and overly stylized scene settings. Burton hasn’t much changed his style in 20 years, and it’s frustrating to see someone who was once a visionary quote himself: dinner table scenes from Beatlejuice, topiary from Edward Scissorhands, action sequences from Sleepy Hollow, makeup from Sweeney Todd, and landscapes from The Nightmare Before Christmas. I felt as if I had seen everything in Dark Shadows already.

I think I would have been less bothered by Burton’s clichés if the screenplay had given me something to hold onto. Barnabas’s plight was hard to sympathize with; I didn’t like cheering for someone who kills people and doesn’t show much remorse. The Collins family is populated by caricatures, which makes liking them hard, but it’s even harder to like them when they find out Barnabas is a mass murderer and they just shrug it off. That’s just weird. And not the kind of weird that we want from Depp and Burton.