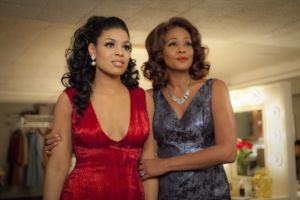 I apologize for not posting these in a more timely fashion. It’s been a crazy few weeks. Sparkle wasn’t very good, but Sparkle kinda was.

During one of the arguments Whitney Houston’s character in Sparkle has with her daughters about why they shouldn’t try to make it in the music industry, she says, “Was my life not enough of a cautionary tale for you?” It’s a startling moment, to say the least. When Houston uttered it, the film set must have shuddered with sad recognition. Because the life of Houston, who drowned earlier this year in a hotel bathtub after an accidental overdose of prescription pills, was certainly a cautionary tale.

The main reason that Sparkle is getting attention is that it is Houston’s last film performance, and it features her last recordings. While recording 11 number one singles and selling 200 million records, she starred in several hit movies, which were hits despite her acting. When she sang, she emoted with raw honesty; when she acted, she was wooden and unbelievable. Sparkle continues that. It only stars Whitney Houston in that she got second billing; she’s the sixth or seventh lead. And she looks older and frailer than her 48 years. When she’s on screen, I grew depressed. Until she got to sing her one song. When Emma sings – when she preaches – “His Eye is on the Sparrow,” a gospel hymn, in the church she and her daughters attend, it’s a stark, moving reminder of Houston’s talent.

In the original version of 1976 Sparkle, Emma’s role was much smaller (and played by the great Mary Alice) and she was called Effie. I guess they changed her name after Dreamgirls, also a thinly veiled retelling of the formation of the Supremes, was led by another Effie, and that name is all hers now. The other differences between the new version and the original are less practical and more political. In the original, the three sisters passively accept their boyfriends’ proposal that they form a singing group; everything happens to them, both the success and the clichéd disasters. In the new version, the sisters make their own fortune.

The new version is in many ways a feminist reinterpretation. This time, instead of being a meek hanger-on, Sparkle (American Idol Jordin Sparks trying and failing to be Irene Cara) is the ambitious genius behind the music. Her sister, the front woman of the group known as Sister (the intensely charismatic Carmen Ejogo), is still a fatally flawed, but she has much more agency and ambition and justification for her anger. And the men are much more interesting. Sparkle’s stand-up boyfriend Sticks (Derek Luke) is worth falling in love with. Sister’s first boyfriend Levi (Omari Hardwick) seethes with class resentment, and her second boyfriend, the dastardly Satin (Mike Epps), is not a mobster anymore: He’s a stand-up comedian who makes his living telling black jokes to white people. The way that Mara Brock Akil rewrites and resolves Sister and Satin’s story in the new Sparkle reminded me of how Quentin Tarentino, traumatized by the gang rape in Deliverance, wrote the gimp scene in Pulp Fiction to make amends.

Neither version of Sparkle is a great movie. While the old one is a Blaxploitation musical, the new film is basically a potboiler, a low-rent Dreamgirls. While Sparkles does feature arguably better songs (almost all of which are remakes of Curtis Mayfield’s brilliant original soundtrack), it doesn’t have the style, depth, or performances of that now-classic. Sparks is believable as Sparkle, but aside from a couple of nice speeches, she’s just too bland to carry the film. And we are forced to wait way too long to hear her sing by herself. When she does, it’s transcendent, which makes the wait even more annoying. Ejogo and Epps are the best things about the movie, but Angela Bassett and Laurence Fishburne did the same thing better in What’s Love Got to Do With It. Houston is a side show, a visual distraction. It isn’t what the greatest singer of the last thirty years deserved.

DVD of the Week: Sparkle

I was surprised that the original film was written by Joel Schumacher, who went on to gayify Batman and direct St. Elmo’s Fire and The Client. But I was more surprised by Irene Cara in the title role. She’s so young, so vulnerable, and her singing is as soulful as Jordin Sparks is studied. As Sister, Lonette McKee is stunning, both vocally and visually, and it’s odd that she never became superstar. While the film is full of cheesy dialogue – Philip Michael Thomas delivering much of it as Sticks – the depiction of 1950s Harlem and both Cara and Mary Alice’s performances have an authenticity that the new version never achieves. It was the only film the acclaimed film editor Sam O’Steen directed, and it’s a shame, because it’s a beautifully shot movie.