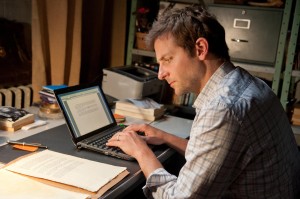 I think that few things are duller than a plagiarism scandal. I’ve worked as an editor, a literary agent, a journalist, and I currently teach writing, so I take plagiarism very seriously – no one should ever put their name on the words written by someone else. It’s lazy and dishonest. But as moral crimes go, it’s up there with money laundering and illegal dumping on the list of seriously un-dramatic transgressions. But since writers are inherently navel-gazers and since plagiarism is one of the worst crimes we can commit (right after making stuff up and saying it’s true), too many writers think that there’s something profound and exciting about stealing words. Rarely, if ever, is that true. And that’s the main problem with The Words, Brian Klugman and Lee Sternthal’s shallow and pretentious drama about a writer who passes off someone else’s novel as his own.

The film begins with Clay Hammond (Dennis Quaid) reading from his novel The Words to a well-dressed New York literary audience. Immediately, this story takes over the film, and we watch Rory Jensen (Bradley Cooper) struggle to become a novelist. After failure and more failure, he finds a yellowing manuscript in an antique valise his wife Dora (Zoe Saldana) bought for him in a Paris antique store. It’s a brilliantly written, transcendently moving story of a post-war love affair, and for some bizarre reason, Rory types the whole thing into his laptop one night. Dora comes across it, reads it, and tells Rory it’s the best thing he’s ever written. For some bizarre Rory lets her believe he did write it, and then for some bizarre reason, he gives it to an agent. And it becomes the biggest literary sensation of the year. Unfortunately, the old man (Jeremy Irons) who actually wrote the book and whose wife lost it on a train sixty years before shows up to confront Rory. Back in the real world, a Columbia graduate student named Daniella (Olivia Wilde) is flirting with Clay, trying to get him to explain why he’d write Rory’s story.

While Klugman and Sternthal handle the story within a story within a story rather clearly, I was never sure why the overly complex structure was needed. I suspect that the original screenplay, written over a decade ago without a studio or an expensive cast in mind, was more artful and even more pretentious, perhaps influenced by the Russian doll construction of Mulholland Drive. But Klugman and Sternthal are not David Lynch, to say the least. Nor are they Woody Allen or Billy Ray, whose Crimes and Misdemeanors and Shattered Glass, respectively, are the best American films about ethical violations. The Words is too glossy, too deliberately high brow; it has the aesthetic of an important movie, but neither the screenplay nor the direction explores the sort of emotions and situations that would explain Rory’s actions or the old man’s response.

For me to care about Rory, I needed to believe that he needed to lie so brazenly to be accepted by his wife and father. But his lust for success is never established beyond the briefest sketch. Partly, Cooper is not actor enough to communicate the sort of needy, neurotic fear of failure that I imagine would consume a man like Rory. Quaid is better as Clay since he can play cocky as a thinly veiled defense mechanism better than most actors of his generation. Irons, particularly in the first of his two lengthy scenes, single-handedly makes the film interesting and edgy for a few minutes. His sly, nearly snide gravitas make the scene crackle, and Irons is good enough to make Cooper better. But then he’s gone.