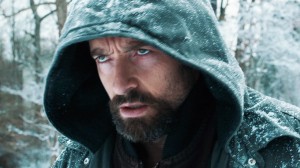 About half way through Denis Villeneuve’s haunting, absorbing, and morally problematic Prisoners, Keller Dover (Hugh Jackman) and Franklin Birch (Terrence Howard) are screaming at each other. Keller is insisting that he knows that Alex Jones (Paul Dano) is the man who has kidnapped and hidden his and Franklin’s young daughters; Franklin, in tears, keeps saying, “You don’t know!” He’s in tears because Keller has kidnapped Alex and is torturing him, and Franklin has reluctantly helped. (This isn’t much of a spoiler because the previews for the film tell you all of this, more or less.) This scene is intense and loud and both Howard and Jackman are convincingly falling apart, but I couldn’t help but agree with Fanklin. Keller is wrong; his obsession with Alex is based on an impotent rage and only a shred of evidence that Alex, who has an intellectual abilities of a 10-year-old, took his daughter. As Keller becomes more violent and more sure of himself, I found him less and less sympathetic and more and more hopeful that Detective Loki (Jake Gyllenhaal) would catch Keller before he finds Keller and Franklin’s daughters. It’s a strange, if fascinating experience to cheer against the film’s hero.

Thanksgiving Day, he and his son Ralph (Dylan Minnette) go hunting and they, along with Keller’s wife Grace (Maria Bello) and daughter Anna (Erin Gerasimovich), bring venison to dinner at the Birches, Franklin, his wife Nancy (Viola Davis), and their daughters, teen-aged Eliza (Zoe Soul) and young Joy (Kyle Drew Simmons). As the adults talk and eat and laugh, the kids go play. Later, after a desperate search, no one can find either Anna or Joy. Ralph says that they had been playing near an old camper parked down the street. Loki, after eating Chinese alone as his Thanksgiving dinner, finds Alex in the camper parked at a gas station. After questioning Alex, Loki doesn’t believe that he could be capable of the crime. Keller, with Grace hysterical and popping sedatives, is convinced Alex is guilty and decides to take matters into his own hands.

Aaron Guzikowski’s script pushes the audience to switch their allegiances, and it also attempts to misdirect us in the mystery of who actually took the girls. It relies entirely too much on coincidences and classic psychopath movie tropes, but Villeneuve’s direction, Roger Deakins’s cinematography, and the ensemble of great actors turn what is essentially pulp into nearly high art. Villeneuve uses none of the tricks that Hitchcock or Fincher might in a similarly creepy tale. Rather, he focuses scenes on the emotional power of the acting, keeping them in tight quarters, either a cramped bathroom, the front seat of a car, or various basements. Deakins, relying heavily on the darkness of late autumn in Pennsylvania — clouds, rain, or actual night –crafts images that are simple and realistic but also haunting and disturbingly beautiful.

Jackman gives the loudest performance, both in decibels and in emotions, but Gyllenhaal is just as effective. An obsessive, mostly solitary, mostly brilliant cop dealing with unhinged parents and criminals with little grasp of reality, Loki is both the moral and gravitational center of Prisoners. That Gyllenhaal can hold that center, with much showier actors like Jackman, Howard, Dano, and Melissa Leo (as Alex Jones’s aunt) around, is testament to his quiet, forceful charisma. The title of the film, which references the captivity of girls and Alex bluntly, but also the emotional terror experienced by the Dovers and Birches, can also be applied to Loki, who seems to be a prisoner of his dedication to solving a horrendous crime.