Sally Field is brilliant in ‘Doris’ 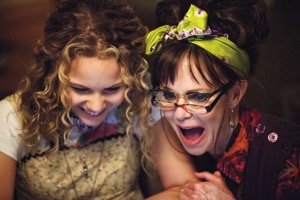 Isabella Acres and Sally Field in Hello, My Name Is Doris

At various times in my life, I’ve frequented nightclubs: loud music, overpriced drinks, spinning lights, smoke machines and usually young people dancing in outfits chosen to attract the gaze and attention of other, hopefully very attractive dancers. Occasionally, people would stick out. A guy who arrived in loafers and Dockers, a bachelorette dancing in a white veil and an older person in what someone might call “age-inappropriate clothing.” There’d be that one woman over 60 in a miniskirt, a glittery wig, chunky earrings and an original Sex Pistols concert T-shirt. I always loved this woman, not just because it takes a lot of guts to go dancing in a club full of kids younger than her children (if she had any), but also because I knew she had a story, a good story. Hello, My Name is Doris is one such story. Starring a brilliant Sally Field and co-written and directed by Wet Hot American Summer’s Michael Showalter, the delightful Doris is both heartfelt and cringeworthy.

Doris spent her adult life taking care of her fragile mother in their big house on Staten Island. When her mother finally dies, Doris is in her mid-60s and left without purpose or direction. She has her horded stacks of flotsam and her rote, her romance novels, a dull job doing data entry for a vaguely hip apparel company in Manhattan and her friendship with bombastic, widowed Roz (a fantastic Tyne Daly). Then one morning, she’s pressed up against a handsome, charming young man in an elevator; she’s titillated, but when this John (Max Greenfield) turns out to be the new creative director at her company, she becomes infatuated. Without any self-confidence and twice his age (at least), she keeps her obsession to herself until a self-help guru (Peter Gallagher), using such dopey clichés as “Impossible is just I’m possible!” convinces her to go realize her dreams.

She starts making excuses to spend time with John, some farcical and others much more stalkerish. After friending John with a fake profile on Facebook, she discovers his favorite band is an electronica group called Baby Goya and the Nuclear Winter (fronted by fun. guitarist Jack Antonoff). With the help of Roz’s granddaughter, Doris puts together a garish, outrageous outfit to wear to a Baby Goya show. John sees her there and they become fast, great friends while Doris’ guileless and original style makes her a hipster mascot, even appearing on the cover of a Baby Goya album. As Doris takes increasingly desperate measures to maneuver herself into John’s heart, her brother (Stephen Root) and wretched sister-in-law (Wendi McLendon-Covey) are trying to get her to de-horde and sell her house. Eventually, everything comes to a climax, and I wish the resolution had been a bit more daring and original.

While the third act plotting is uninspired, Sally Field’s portrayal of Doris is the opposite. Field can be hilarious and heartbreaking at the same time, and Doris’ obsession with John made me flinch in embarrassment while also guffawing, while also increasing my sympathy. Field’s performance is full of silly physical gags and subtle emotional realism, and despite being an awkward, hording cat lady, Doris’ process of self-realization – brave and sorrowful and surprising – is inspiring. Writers Showalter and Laura Terruso earn good, broad comedy from hipster satire and Doris’ seemingly hopeless pining, but the film is more resonant and deep than they could have hoped for or intended because of Field’s performance.

Hello, My Name is Doris