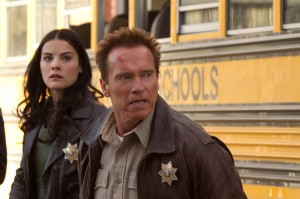 It could’ve been worse.

When I was a teen-ager, I found great joy in Arnold Schwarzenegger movies. And even then, I was a budding movie critic, so I knew, more or less, that my joy was not based in some aesthetic appreciation of his acting, or the films surrounding him, or even in the often great special effects that would accompany those movies. Even then, I recognized that much of the appreciation of Schwarzenegger was in his ridiculousness: his affectless line delivery, his steroidal body, his morally absolute characters, and his thick Austrian accent that never changed over decades in America.

After his extraordinary success in the late 80s and early 90s – in action movies that relied on his muscles like Predator, Total Recall, Terminator 2, and True Lies, as well as comedies that relied on his site gag-ness like Twins, Junior, and Kindergarten Cop – his star fell, and just as he was becoming a cruel rather than an affectionate joke, he managed to become governor of California. I thought he was done with movies, but after he left the governorship, he started making them again. Since Schwarzenegger does not take risks, he is doing what he always did. However, now his muscles are less taught and his wrinkles deeper, and instead of creating new iconic images or uttering new catch phrases, he’s just quoting himself. The latest is The Last Stand, a paint-by-numbers action thriller directed by Jee-woon Kim, the great Korean director making his American debut, is a silly imitation of an 80s movie that Schwarzenegger might have made when he was a bigger and younger star. And because of that silliness, it’s actually pretty entertaining.

Schwarzenegger plays Ray Owens, a former LAPD narcotics officer who became the sheriff of a tiny southern Arizona border town called Summerton Junction to escape the blood and violence of the big city. Unfortunately, on the day that his deputies whine about how dull their jobs are, a great deal of blood and violence come to town. One of the most evil drug kingpins in the world (Eduardo Noriega) escapes FBI custody and a small army of his thugs (led by Peter Stormare) set up his escape to Mexico through Summerton Junction. Even with the FBI’s superior numbers and equipment, they cannot recapture their prisoner. This leaves Ray and his inexperienced crew – including Christiana Leucas, Luis Guzman, Zach Gilford, Rondrigo Santoro, and Johnny Knoxville – to make, yes, a last stand at Summerton Junction, relying on antique guns, old cars, and a lot of luck.

Jee-woon Kim is no slouch at choreographing car chases, shoot outs, and fist fights, and you have little time to ponder the stupidity of the dialogue or the impossibility of the physics when the action is so efficiently, occasionally thrillingly, directed. Kim has a few flashes of artistry, but he makes sure that the film provides what is expected: good fighting evil, nearly witty repartee between the heroes, cackling evil but unmemorable one-liners from the bad guys, vicious and pornographic violence, and Schwarzenegger, playing a mortal, but winning the battle in the way only an immortal could.

Schwarzenegger is not better or worse than he normally is, but he is certainly at ease in his role as the aging, somewhat wise, heavy. He retains his charisma, and it’s easy to cheer for him. Noriega and Stormare are both one-dimensionally evil, and forgettable. None of Ray’s deputies have any depth as characters, but the actors follow orders well, being funny, scared, and brave when they need to be. I laughed, my heart rate went up, and I had fun. I guess that’s all we can expect from a Schwarzenegger film.