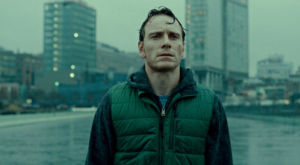 Yet again, I am in the distinct minority on a movie. My review of Shame can be found, of course, on the website for San Diego LGBT Weekly, and I’ve pasted the whole thing below.

Shame, Steve McQueen’s dystopian tale of compulsion and sibling conflict, is the most sexually explicit movie I’ve seen since John Cameron Mitchell’s Shortbus but it is not nearly as interesting, inventive or sexy as Mitchell’s movie. In fact, Shame is about as sexy as taking a cold shower, clothed, while your grandmother sits on the toilet seat and tells you about her dentures. To be fair, Shame is not meant to be sexy, or at least I don’t think it is. In theory, watching the chiseled, intense Michael Fassbender get blown in a gay sex club and have a ménage à trois with two burlesque dancers should be hot, or at least really titillating. But by the point in the film when these scenes arrive, Fassbender’s Brandon Sullivan has shown himself to be so cold, angry and self-hating that McQueen could have sent him running through a field of daisies singing “Oh, What A Beautiful Morning,” and I would have still been depressed.

Brandon works in finance and has a white, spare apartment in a fancy building in the middle of Manhattan. He has sex with every vaguely beautiful woman he meets, and he masturbates all of the time, even at work. His life resembles that of Patrick Bateman from American Psycho, except that Brandon feels – wait for it – shame. When his computer at work is taken in for repairs, he immediately fears what will be found on the hard drive, and when he gets caught masturbating by his sister, he becomes enraged. When he tries to have sex with a woman he actually likes and can’t get it up, he’s mortified. I’ve seen articles about Shame that state that Brandon is a sex addict, but this seems like a misreading. He has sex compulsively and with strangers, but when he doesn’t have sex, he doesn’t go through withdrawal. He seems to have sex in order to punish himself; he shows no pleasure in it, not in the hunt, nor in the kill. If he’s addicted to anything, it’s repression.

What Brandon is punishing himself for is never clear, though it has something to do with his younger sister, Sissy, played with ecstatic rawness by Carey Mulligan. The film opens with Brandon playing and deleting Sissy’s answering machine messages, and when she lets herself in and invites herself to stay while she’s in town singing at a couple clubs, he is greatly irritated. She is impulsive and flighty and needy and her arms are covered in scars from cutting herself, but when she sings “New York, New York” slowly, almost as a lament, it’s clear that Sissy is much more in touch with her emotions that Brandon is. Brandon is so unhinged by Sissy because of something from their past, but aside from the reference that they “came from a bad place,” this past event is left to our imagination.

That McQueen and his co-writer Abi Morgan refuse to provide us with the big reveal is probably a rejection of the clichéd plot structures of most psychodramas. This seems ironic to me, because Sissy’s character, Brandon’s self-flagellation and making gay and group sex akin to an addict’s rock bottom are as clichéd as the phrase “done to death.” As beautiful as McQueen’s visuals are and as well as he directed the cast, the film just isn’t as profound and moving as Brandon’s final breakdown indicates it is supposed to be.

That said, when Fassbender commits to an emotion, he is mesmerizing; he’s a third Lawrence Olivier, a third Al Pacino, a third Christian Bale. Even if Brandon is the least attractive character he’s played this year (I’d take his Rochester in Jane Eyre, thank you very much), it is the most striking and the bravest performance. He has been widely tapped to receive his first Oscar nomination for Shame, and it will be deserved.