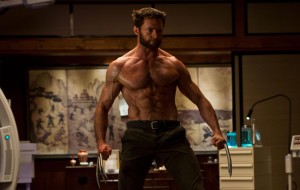 When I was reading comics as a teen-ager, I was one of the few readers who did not claim that Wolverine was his favorite member of the X-Men. I found him a somewhat shallow construction, gruff and violent, with a mostly golden heart. The adamantium-clawed, cigar-chomping Canadian seemed obvious to me, the kind of character that a marketing expert would devise for teen-aged boys. However, as he became more popular, Marvel Comics’ writers gave his back story much more depth, he was made much conflicted and complicated. And then Hugh Jackman was cast to play him in the first X-Men movie. Jackman, a terrific actor, turned Wolverine into an emotionally vulnerable, fiercely charismatic action hero.

Unfortunately, his first spin-off movie X-Men Origins: Wolverine was, to say the least, underwhelming. Despite Jackman’s charm and allure, the movie was bombastic, silly, and artless. When Marvel announced that Darren Aronofsky, who gave us the avant garde classics Requiem for a Dream and Black Swan, would direct the sequel, I was thrilled. Then Aronofsky was replaced by James Mangold, and while he’s good – he directed Walk the Line and 3:10 To Yuma, which are both excellent – he is not a visual visionary like Aronofsky. Still, Mangold’s film, The Wolverine, is a great leap forward for the franchise, which has yet to reach its potential.

Loosely based on a famed 1982 limited series written by Chris Claremont and drawn by Frank Miller, The Wolverine takes place some time after the events in the third X-Men film, The Last Stand, which ended with Wolverine killing Jean Grey (Famke Janssen), who had become mad with power. Unfortunately, Wolverine was in love with Jean, and she continues to haunt his dreams. The film opens with Wolverine living alone and depressed in the mountains, denying his identity as a hero and unable to see any point in his life, which is now more than a century long, thanks to his mutant healing ability. A spunky red-haired Japanese woman named Yukio (a delightful Rila Fukushima) finds him and convinces him to fly to Japan to say good-bye a man Wolverine saved during the nuclear bombing of Nagasaki. The man, Yashida (Hal Yamanouchi), is now the richest man in Japan and he has spent billions trying to beat cancer; he wants Wolverine to give him his healing power. Wolverine refuses, Yashida dies, and then all sorts of Japanese mob-based violence erupts. Wolverine had promised to protect Yashida’s granddaughter Mariko (the supermodel Tao Okamoto), which he does, ferociously but mysteriously without his healing power. Romance, swordfights, and chases ensue.

As with most superhero movies, the action is copious, and Mangold films it well. This particular storyline focuses mostly on hand-to-hand combat, knives, arrows, and bullets, so the fights look much more realistic – a relative term, of course – than the absurd, totally CGI action in Man of Steel and Iron Man 3. A few scenes, like the one on top of a bullet train and couple with masses of ninjas and tattooed thugs, are thrilling and impeccably shot. Some of the images that Mangold and his cinematographer Ross Emery create are perfect replicas of Frank Miller’s iconic drawings from 1982; some of the movie is simply gorgeous. As are Okamoto and Jackman, who is a muscle bear icon.

The movie is far from perfect. The villains, particularly Svetlana Khodchenkova as Viper, are underwritten, and the reasoning behind the various conflicts with Wolverine and Mariko do not resonate as much as they should. I didn’t care much about Mariko, or at least not nearly as much as I did for Yukio, who stole most of her scenes with Wolverine. Doing that to Jackman is impressive, though not as impressive as what I imagine Aronofsky could have done, given the chance.