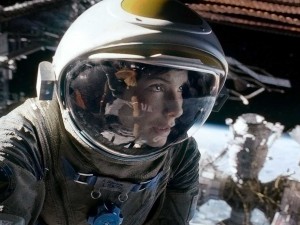 There’s a sequence of scenes in Alfonso Cuarón’s space thriller Gravity about half way through the film that starts tense, becomes nail-biting, and then explodes – literally and figuratively – into a mind-boggling orchestra of space disaster action. I was clenching my boyfriend’s thigh and clenching my jaw at the beginning of it, but when it reached its full throttle, I was slapping his leg and laughing and bouncing up and down in my chair. I wasn’t laughing at the movie; I was laughing the way I have when I am on a roller coaster and it is throwing me through the most absurdly improbable flips and loops. Cuarón’s use of CGI, 3-D, and IMAX photography is so skilled that I found myself nearly ducking the space shrapnel hurtling towards the audience. Such an enveloping, unnervingly real film, Gravity is an actually astonishing experience.

Comparisons to 2001: A Space Odyssey and Star Wars are apt; those films changed the way space was filmed. In 2001, Stanley Kubrick turned science fiction into high art with his slow, awe-inspiring, and epic-scale photography of humanity’s first encounter with interstellar intelligence in the form a giant black monolith. And George Lucas took special effects to heretofore unthinkable places when he managed to credibly and beautifully set a mythic war film in space with Star Wars. Gravity does not have the complex stories that 2001 and Star Wars do, but it as technologically revolutionary; it will redefine the genre and the possibilities of space movies.

The plot of Gravity is quite simple. In the very near future, NASA astronauts have taken a space shuttle into orbit in order to repair the Hubble telescope. It is Matt Kowalski’s (George Clooney) last mission and Dr. Ryan Stone’s (Sandra Bullock) first. Kowalski is enormously confident and jokes around a lot, while Stone is extremely anxious and having trouble with the weightlessness causing her to be nauseated. While they are on a space walk outside the shuttle working on the telescope, Mission Control in Houston tells them to abort the mission because a Russian anti-satellite missile test has gone horribly wrong. Masses of satellite shrapnel are hurdling towards them. Before Stone and Kowalski can return to the shuttle, the debris arrives, destroying the telescope and the shuttle and killing the mission’s other astronauts. Stone and Kowalski are sent hurtling into space. The rest of the film is focuses how they try to survive.

The screenplay puts Gravity in the shipwrecked-and-struggle genre along with Castaway and 127 Hours, and it provides particularly Bullock the material to give her greatest performance. Working almost totally with a green screen while strapped into a metal cage, Bullock still manages to communicate a multiple of emotions, from desperate fear to hope to irony to wistful love. As much as I loathed The Blind Side, Gravity justifies Bullock’s Oscar for it; while it’s impossible to forget that she is movie star Sandra Bullock, she is convincing as astronaut Sandra Bullock. Clooney, on the other hand, is playing the character he has perfected in the Oceans 11 movies, and while that is charming and funny guy, it’s distracting, especially considering the stake of the film and Bullock’s performance. However, Clooney’s role is actually comparatively small. My only other complaint is that in a couple of places, the screenplay Cuarón and his son wrote approaches cheese. I can imagine that such a story of survival can lend itself to sentimental emotions, but I think it could have been resisted. I doubt, however, anyone can resist the thrilling spectacle of Gravity.