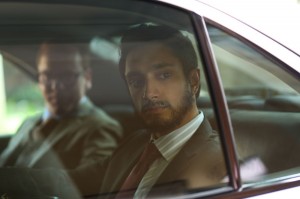 If you were offended by Zero Dark Thirty, and there’s good reason to be, you may find solace in The Reluctant Fundamentalist, which is as subversively anti-American and anti-imperialist as Zero Dark Thirty was pro-American and pro-fascism. Based on the novel by Mohsin Hamid, it is the story of how Changez (Riz Ahmed) is transformed from extremely eager, extremely competitive capitalist – from Princeton to investment banking – into the heroic professor of anti-American student protesters (and possibly terrorists) in Lahore, Pakistan. Changez tells his story to Bobby Lincoln (Liev Schrieber), a journalist covering the kidnapping of one Changez’s university colleagues, an American scholar. It’s a fascinating process, and Ahmed gives one of the great performances of this year (and I suggest you goggle his rap song “Post 9/11 Blues), but as usual with most movies directed by Mira Nair there are too many missteps and odd moments to make it great film. Kate Hudson, playing Changez’s American girlfriend, is dreadfully directed, and Schreiber gives the worst line readings of his career. Kiefer Sutherland, as Changez’s banker boss, is great, but he and Ahmed are not enough to make up for weak pacing and bland cinematography. Still, it’s a powerful story and a useful counter to the mindless anti-Muslim and silly jingoism of most American films.