We assume she’s not human, but we don’t know what she is 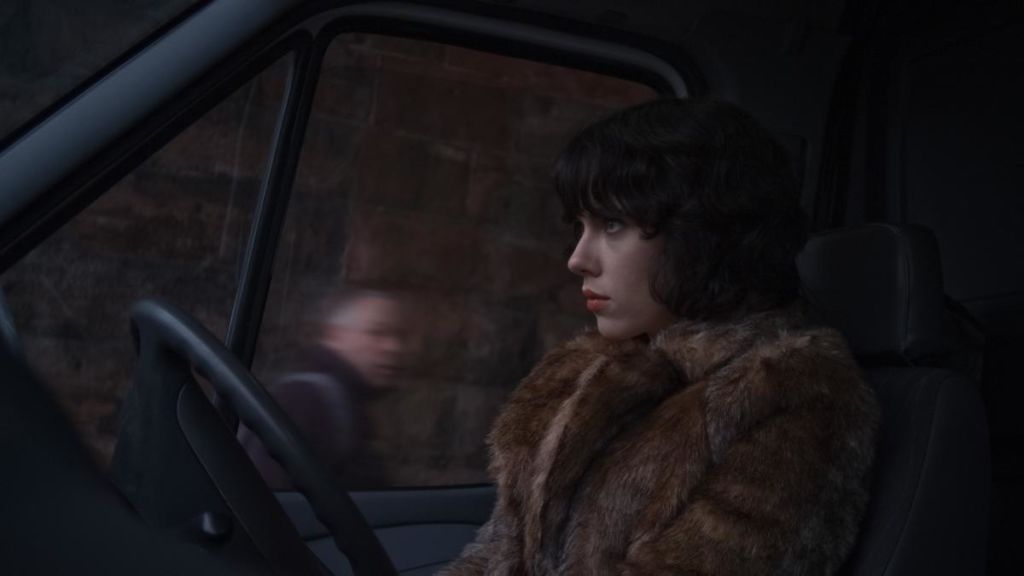 There are a large number of people who will go to see Under the Skin simply because they heard that there was a great deal of nudity in it. Of particular importance, Scarlett Johansson, the famous and curvaceous blonde actress many men (and women) fantasize about, is particularly naked, the first time she was gone full frontal on film. This is of note, I guess, because, especially in the United State, nudity is taboo and actresses who are willing to be nude on film are often looked down upon (while actors who do it are considered brave). Johansson did not go nude for a blockbuster Hollywood film, but, rather, for art, which should get her a pass from our nation of prudes. I have a feeling that the pervs that go to see Under the Skin won’t give it a pass, because they will likely be mystified – unless the pervs enjoy difficult, ponderous art films. I’m not a perv, but I do love that type of film, and director Jonathan Glazer has made an indelible, hypnotic masterpiece of an art film with Under the Skin.

The film begins with a clear signal that the viewer is not going to be coddled as they are with populist Hollywood movies. After spare white credits, the screen in black for a long moment as a low drone sounds. Finally a white dot appears, then a bright star, then swirling colors and abstract images while the soundtrack crackles and beeps and Scarlett Johansson’s voice is heard making various phonetic sounds: e, ah, oh, and so on. This goes on for a while, and it’s as beautiful as it is perplexing. Finally, we see the dark (Scottish, as it turns out) countryside and a speeding motorcycle turning through a curvy road. The cyclist stops, run downs an embankment, and then returns, a dead woman flung over his shoulder. He puts the body in the back of a parked white van and zooms away. Suddenly, we see a vast space of white light; a naked woman (Johansson) pulls the clothes off of the dead woman and dresses herself in them.

Next, we watch her driving the van around Edinburgh, stalking men. After she finds a man who is alone, has no one expecting him and no family, she seduces him. Each time, she drives him to an abandoned building, which she enters first. As he follows her, they are both suddenly in a space as black as the clothes-change space was white. She undresses, beckoning to the man, and he walks towards her, removing his clothes, piece by a piece. When he is completely naked (and often erect), the blackness envelops him until he is gone. She puts her clothes back on and looks for another man.

We assume she’s not human, but we don’t know what she is. We are never told why she is killing these men, how she is doing it, who the helpful motorcyclist is, or why she expresses no emotion as the men (or any others) die. However, something does happen to her after she picks up a disfigured man with plans to send him, like the others, to the black goo. (That man is played by Adam Pearson, who actually has neurofibromatosis, which causes non-cancerous tumors to grow on his face.) She seems to develop introspection, and this leads her deep into the Scottish countryside, the motorcyclist in pursuit.

If all of this sounds rather odd, it is. That the film offers no explanation as to the motivation or origin of Johannson’s character or her motorcyclist pal and barely provides signals of her transformation in the third act. The audience needs to do a lot of work to piece things together, and this is often the hallmark of what we call “art films.” Sometimes, I think, this abstraction becomes pretentious, but other times, like in Under the Skin, the abstraction is what makes the art. I don’t think too many people would argue that any semi-skilled actress could have done Johansson’s part, but Johansson’s fame was needed to bring in audiences. Once there, they can witness Glazer’s sublime use of the Scottish landscapes, Mica Levi’s truly haunting score, and our own expectations of science fiction to create one of the most original major films in some time.