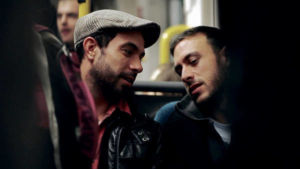 I’ve seen the best gay movie since Brokeback Mountain and it is Weekend. Here’s the link to my published review (which includes my Footloose review, too), and here’s the whole thing:

Whenever I see a gay movie as strikingly good as Weekend, it makes me ponder gay cinema in general. The dearth of good movies about gay people is palpable. I am reminded of it every week because I review movies for a gay newspaper, and rarely do I get to write about a new movie featuring, let alone being led by, a gay, lesbian, or transgender character. This is only the fourth time this year. Two films last winter were open for a total of two weeks combined; Gregg Araki’s Kaboom was barely watchable, while Xavier Dolan’s Heartbeats was stylish, brilliant, and in French, but barely anyone knew that it was even at the theater. Beginners, Mike Mills’s beautiful meditation on love and loss, featured Christopher Plummer’s portrayal of a late-to-come-out gay man that will probably win him an Oscar.

But the main plot of Beginners revolved around a heterosexual romance, and even though it was marketed towards gays and lesbians, it felt like, as Brokeback Mountain and Milk did, a movie made for straight people. This isn’t a problem, of course, but as a gay man, it would be nice – actually, it is necessary, even imperative – to see my people, to see people like me on the screen. The lesbians have recently had this experience with The Kids Are Alright, but Weekend the first movie since Brokeback Mountain that I felt a part of. And better, Weekend is not about the closet or about secrets or the 1960s; it is about what it is like to be gay and in love now. It is an immediate, intimate, and honest examination of love, sex, and longing in 2011. It’s also gorgeously shot, sensitively acted, and sexier than any gay film I can remember.

In some English city, Russell (Tom Cullen) leaves his straight best friend’s party a little early and heads to a gay bar, where he gets drunker and meets Glen (Chris New). They end up spending the weekend together, and the film follows their awkward small talk, their flirtations and revelations, their drug-fueled musings and arguments, their sex, what turns out to be burgeoning of love, and Glen’s revelation that he is moving to the United States on Sunday afternoon.

Some of the excitement of seeing all of this is that they’re both young and a bit green. What is thrilling and wrenching for them was also for me. Russell, who grew up in foster families and is timid about publicly acknowledging his sexual orientation, works as a lifeguard at a community pool, but he doesn’t seem to be passionate about it; he says his life is “fine.” Glen works at a gallery and is more experienced, a bit arrogant and quick to quip, and he’s perhaps less mature, or at least more emotionally volatile, than Russell. They have a classic introvert-extrovert attraction: What a critic usually calls chemistry – the stuff Tom Hanks and Meg Ryan have, or Humphrey Bogart and Lauren Bacall – is technically apparent, but the film is so naturalistic that it doesn’t seem as if Cullen and New are simply excellent, intuitive actors, but rather that Russell and Glen are falling in love.

Andrew Haigh’s sensitive direction and editing and Urszula Pontikos’s cinematography turn what is basically a two-person parlor play into an intense, almost epic work of beauty. It’s hard for me not to be hyperbolic in my love for Weekend, and in turn, I am irritated that it will be open for only one week in San Diego. Perhaps if we sell out the first weekend, Landmark Cinemas will find it in their hearts to keep the film around longer.