Katniss Everdeen is my hero 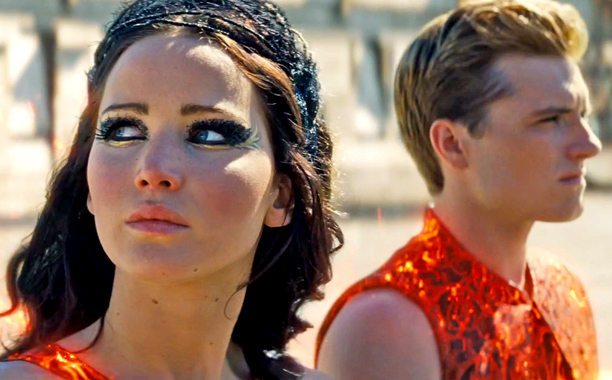 I’ve started to think that when judging movies we should not compare them all on an equal plane. They should be placed into specific categories, and these shouldn’t be based on genre, like comedy or drama, but rather on budget. A movie with a $5 million budget, for instance, doesn’t deserve to be placed next to a movie with a $150 million budget. They are usually being made for very different reasons, for very different audiences. The makers of Fruitvale Station, for example, hope their movie will be seen by as many people as possible, but even if they pandered to sentimentality, they were not pandering towards mass audiences’ desire for blood, flash, and obvious emotional resolutions. Massively expensive movies like Thor: The Dark World pander to those things while being vehicles for selling toys, selling TV shows, selling the next Marvel movie. They are meant to be easy to dub in other languages, because the international market for special effects laden films is now bigger than the US market is. As one of those films, The Hunger Games: Catching Fire is the best of the year.

When last we saw our heroes at the end of last year’s The Hunger Ganes, Katniss Everdeen (Jennifer Lawrence) and Peeta Mellark (Josh Hutcherson) had won the 74th annual Hunger Games, a battle royale pitting tributes from the 12 districts that comprise the dystopian future nation Panem. Two champions are randomly selected from each district, and they are thrown into an arena and told to kill each other while a nation watches; the last survivor wins. But Katniss refused to kill Peeta, who was also from her home, District 12. Because she had become so popular, and the masses had come to believe Katniss and Peeta were in love, the government of Panem allowed them to live.

But in defying the government, and its dastardly President Snow (Donald Sutherland), Katniss and Peeta became symbols of hope for the people oppressed and enslaved by Snow’s government and the people in the capital, who live like Roman dilettantes. Snow decides Katniss needs to be eliminated, and with the help of the new producer of the games, Plutarch Heavensbee (Philip Seymour Hoffman), the 75th Hunger Games is used to pit former winners of the games against each other, to get rid of Katniss as well any other potential symbol of resistance. Like much of the behavior of Snow and the Panem government, it’s horrifying and cruel, and the former winners, while resolved to their fates, are furious. Peeta and Katniss end up allied with the dashing Finnick Odair (Sam Claflin), the elderly Mags (Lynn Cohen), the bitter Johanna Mason (a revelatory Jena Malone), the brilliant Beetee (the great Jeffrey Wright), and the probably crazy Wiress (Amanda Plummer, doing what she does best). What happens during these games is thrilling, disturbing, and, unless you’ve read the book by Suzanne Collins, surprising. The parallels to The Empire Strikes Back, in both quality and themes, are clear by the end of Catching Fire.

Like its predecessor, the success of Catching Fire lies in both the rich and layered source material and the inspired casting. Lawrence, who won an Oscar in March for Silver Linings Playbook, is the rare actor who is completely convincing as an action star and a dramatic lead, and even rarer, she can do both at the same time. Katniss is both the emotional and moral center of the story, and Lawrence expresses Katniss’s complexities – a fierce hunter, a confused lover, an enraged subject — with a raw fury. It’s unexpected for a blockbuster to be so resonant, but they all can’t have Jennifer Lawrence.