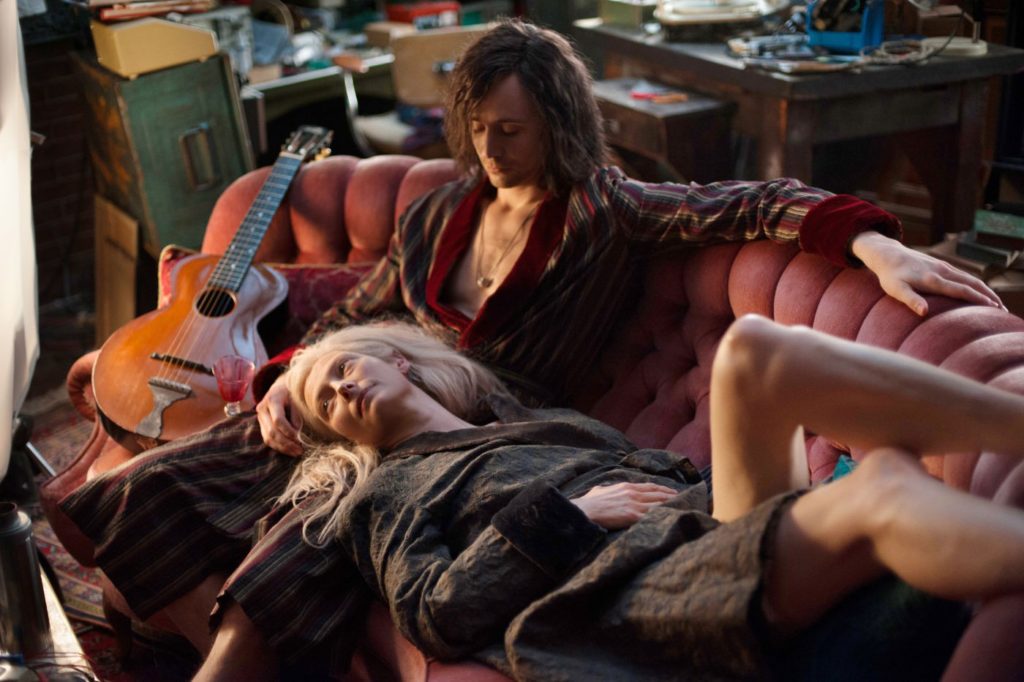 For a good number of people, I could convince them to see a movie with a review one sentence long: “Tilda Swinton plays a vampire.”

Though she’s been starring in films for nearly three decades – her first role was in Derek Jarman’s queer masterpiece Caravaggio in 1986 – it has only been since she was perfectly cast as the White Witch in Lion, the Witch, and the Wardrobe in 2005 and then won an Oscar two years later for Michael Clayton that she became truly famous. She is strikingly tall, archly beautiful, and she has an acting talent as nuanced and mannered at Cate Blanchett’s. But she has a taste for much weirder roles, as the title character in Sally Potter’s transgender classic Orlando, the 83-year-old Madame D. in The Grand Budapest Hotel, or as both David Bowie’s wife and as David Bowie himself in David Bowie’s video for “The Stars (Are Out Tonight).” And then there was her art project in 2013 at the Museum of Modern Art in New York; she slept in a glass box as museumgoers watched. She has developed such a cult following as an icon of artful oddness that the utterings of the parody Twitter account @NotTildaSwinton seem believable: “A mission for you. Go outside, hold an animal to your breast. That is real warmth, not the glow of your screen. I typed this on a rabbit.”

In Jim Jarmusch’s Only Lovers Left Alive, Swinton plays Eve, an achingly-sweet, centuries-old aesthete who happens to be a vampire. Her similarly afflicted husband Adam, played by Tom Hiddleston (who is Loki in the Thor films and The Avengers), is a glum musical genius who hides from the world, composing from afar, talking to no one but a clueless hired hand (Anton Yelchin) and his wife, but to her only over Skype. She lives in Tangiers, along with her friend Kit Marlowe (yes, that one, played by John Hurt), and Adam lives in a particularly dilapidated section of Detroit. She decides to come to him after he expresses more suicidally depressive thoughts about the weight of the world. During her visit, as they discuss history and art and their love, Eve’s crass and silly sister Ava (Mia Wasikowska) arrives, and she creates situations that force this short story in the lives of Adam and Eve to climax in hunger and, of course, blood.

Unlike most vampire films, which tend to have outrageously high stakes involving the end of the world or at least the ends of the main characters, Only Lovers Left Alive is a slow, thoughtful, often hilarious character study. Jim Jarmusch has been making such films since the early 1980s, and he has been able to bring in talents similarly idiosyncratic to Swinton’s, with Tom Waits in Down by Law, Johnny Depp in Dead Man, and Bill Murray in Broken Flowers. Hiddleston is wonderful in the movie, bitterly funny and in awe of his wife, but Swinton is loving, beating, glorious heart of the film. She is heroically generous, kind, and wise. And as someone who once dreamt of being an aesthete himself, I fell in love with her Eve as she packed dozens of aging, yellowing books for her trip to Detroit.

Detroit itself is an uncredited member of the cast. Adam has sequestered himself in a crumbling mansion in a barely lit part of America’s most embarrassing failure, and he takes Eve for long drives through the deserted streets, guiding the tour with achingly sad stories about the once epically beautiful buildings that are now car parks and ruins. It is a symbol for Adam’s sadness about the world and what the zombies – his terms for humans – have done to it. Or, Adam and Eve’s relationship and Eve’s desire to keep living and loving forever is a metaphor for the hope for Detroit’s (America’s?) future. Or it’s both. Jarmusch, who grew up in the similarly sad Akron, has made a movie about the undead that it actually about living.