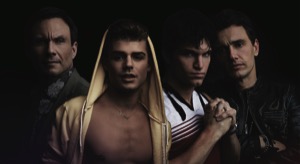 Continuing his long string of occasionally artful, but mostly exploitative gay roles, James Franco has given us King Cobra, the tawdry and dopey story of the porn star and San Diego gay celebrity Brent Corrigan, his Svengali director at Cobra Video, and the dumb-as-dirt couple who murdered the latter. As most know, Franco, who produced and co-stars as one of the killers, is not gay, but he loves playing gay and teasing us with vaguely gay antics. I can see why he was drawn to the story of Brent Corrigan, because it’s scandalous and ridiculous. But as directed and written by Justin Kelly, it’s those things, and that’s it. Unclear whether it’s a comedy, a thriller or a gay Lifetime film, King Cobra ends up being mostly silly. I was entertained, but not for the right reasons.