Some kids shouldn’t have powers 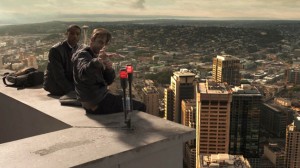 I totes loved Chronicle. Here’s my review, which can also be found here.

A few weeks ago, I watched Dane DeHaan, one of the stars of the new teens-with-superpowers movie Chronicle, answering questions at a press conference about what made Chronicle different from other “found footage” movies. He claimed that the difference was that every shot of film – every spliced together piece of camcorder shots, close circuit clips and news coverage – propelled the story. I’m not sure how this is different from Blair Witch Project, Cloverfield, and Paranormal Activity, since all of those films, the greats of the genre, have pretty clear and propulsive stories. Isn’t it all in the editing? And isn’t it just carefully crafted and constructed footage made to look “found?” Chronicle doesn’t reinvent the wheel. But it does make the wheel shiny and new. Unlike the three movies mentioned above, Chronicle is not just good sci-fi action with smart special effects; it’s a character-driven drama. At times, it’s even moving.

Andrew (Dane DeHaan) is an awkward, easily bullied senior in high school. His drunken father beats him, and his mother is dying of what seems to be emphysema. Andrew’s cool, philosophically minded cousin Matt (Alex Russell) drives him to school every morning and is his only friend. Matt advises Andrew to stop bringing his camera everywhere he goes, because it’s “weird.” And as one cheerleader says, asking him to stop filming the cheerleading practice, “It’s creepy.”

But Andrew doesn’t relent, even bringing his camera to a rave. This is convenient when the big man on campus, Steve (Michael B. Jordan), comes looking for Andrew to film a strange discovery he and Matt had made in the woods. It’s a big hole, and it looks to have been created by an asteroid of some sort. The three boys descend down into hole and find a giant glowing crystal-like thing. The next thing we know, they all have telekinetic abilities.

As they learn to control and hone their powers, Matt and Steve focus on having fun, but Andrew’s home life and his history of being bullied, of being a social outcast, make his goals and his interpretation of what these powers mean more layered, problematic and ultimately sinister.

While much of the film’s edge can be attributed to the scrappy, hand-held and sometimes telekinetically-held found footage, and to Dane DeHaan’s fiercely angry and emotional Andrew, director Josh Trank and writer Max Landis have constructed a thrilling exploration of adolescent angst through fantastical situations. The dialogue rings true; these teenagers sound like teenagers, even when Matt is quoting Jung and Schopenhauer. And when the action starts, it is quick and exciting and terrifying.