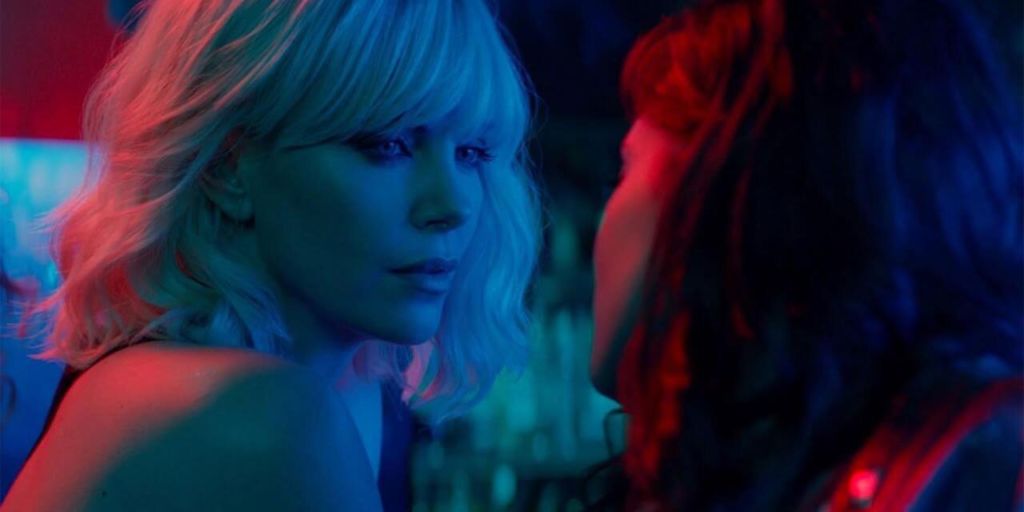 Twenty years ago, Rupert Everett, fresh off his star making turn in My Best Friend’s Wedding, lobbied to become the star of a gay superspy franchise. It never happened despite Everett seemingly being born to play such a role. Neither Hollywood financiers nor the action film ticket-buyers were quite ready for such a character, or at least not ready enough to support a big budget tentpole film a la James Bond.

Nowadays, it’d be possible to do such a thing on Netflix or Amazon – the super-queer sci-fi action show Sense8 lasted two seasons, and something much less expensive could last longer – but it’s still hard to imagine a queer Jason Bourne being made. But a queer Lara Croft? Yes. Women who have sex with women, especially cisgender and bisexual ones, are a much easier sell for multiplexes, the audience for which is largely young and male. And the folks who gave Atomic Blonde its $30 million budget, much of it for Charlize Theron as the lead, probably had them in mind. Atomic Blonde is a landmark as a super-queer action film, but it’s also a perfectly fine action film.

The film takes place in Berlin in the days leading up to the fall of the Berlin Wall. A Soviet spy killed a British spy, stole the list of every clandestine agent alive, and then went rogue, looking to sell the list on the Black Market. MI6 sends Lorraine Broughton (Theron) to Berlin to help their station chief David Percival (James McAvoy) get the list, which is also being pursued by the Soviets and the French. Immediately, things go awry, and she is forced to fight her way through West and East Berlin while having a very James Bondian romance with a French agent named Delphine (Sofia Boutella) and figuring out which of her various allies is betraying her.

The plot is overly, sometimes hilariously, complex, but we’re not in the theater for spy games. We’re there to watch Charlize Theron beat people up. David Leitch, who directed John Wick, directs and choreographs fight scenes as well as any living director, and Theron and her stunt double earn their salaries pounding the bad guys into a pulp and getting their faces pummeled. (Theron chipped a number of teeth during filming). The fights and much of the dramatic action are highly stylized, with searing colors and plenty of chiaroscuro, nodding both to film noir and the film’s source material The Coldest City.

It’s strongly implied that the British agent killed in the film’s first scene was once Lorraine’s lover, but the film’s only sex scenes are between Lorraine and Delphine. And their relationship is the only one in the film that has any kind of emotional resonance. With everyone else, Lorraine lies, manipulates, interrogates and demands; with Delphine, it is said, she tells the truth. Lorraine’s only authentic connection is with a woman, and for a film with Atomic Blonde’s visibility and genre, that’s a radical thing. And the publicity campaign doesn’t shy from this, giving Lorraine and Delphine’s sex scene prominent placement in the widely watched trailer.

Unfortunately, Atomic Blonde relies on a few deeply un-radical tropes of queer films, particularly those about women. And the script for the film doesn’t utilize the film’s extraordinary cast well enough. Theron is as gorgeous and charismatic as ever, but Lorraine needed a more variable affect and maybe a believable back story. McAvoy’s Percival is a fun, ribald and amoral agent, but he’s never given any motivation to explain his behavior. Similarly, both John Goodman and Toby Jones have rather thankless roles.

Each character propels the plot, but they provide us with no reason to care much about the list, the Berlin Wall or who will win in the end. An action film lacking depth of meaning and emotion isn’t all that surprising, and I had a great time nonetheless. I do hope there will be a sequel. I want to learn more about Lorraine, and I want to watch her kick a lot of ass and then get the girl in the end.

In the late 90s, Danny Boyle directed two of John Hodge’s screenplays in a row that made them and their star Ewan McGregor famous. Trainspotting – the brilliant, disgusting, kaleidoscopic examination of a crew of Scottish heroin addicts – is better known, but Shallow Grave, a post-modern Hitchcock thriller about morally troubled Londoners, is just as good: Twisty and shocking and delightfully fun. I was pretty excited that, after 13 years, Boyle was directing a Hodge script again. And it’s a crime thriller, too! Trance is just as twisty and occasionally as fun and thrilling, but it’s a bit too shallow to reach the heights of Shallow Grave. END_OF_DOCUMENT_TOKEN_TO_BE_REPLACED