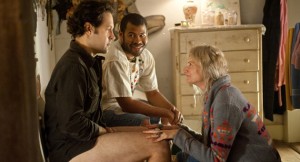 After seeing Wanderlust, I was exhausted and teary. Happily, it wasn’t a maudlin factory of crying jags, like some of last year’s Oscar bait. No: I just hadn’t laughed as hard at the movies since Bridesmaids. While not nearly as surprising nor as carefully and smartly written as Bridesmaids (which was deservedly nominated for an Oscar for Best Screenplay), Wanderlust does something similar: it mines the recession’s soul-crushingness for cathartic humor. And it gives Paul Rudd yet another opportunity to prove his meddle as the best comedic leading man working in Hollywood today. Reteaming with David Wain, with whom he did Wet Hot American Summer and Role Models, Rudd leads a mostly wonderful ensemble that laser-pointedly satirizes New York City real estate, HBO’s programming, Atlanta’s suburban sprawl and ennui, and the eccentricities of modern day hippies.

Rudd plays George and Jennifer Anniston plays his wife Linda, and they are a yuppie Manhattan couple who, as the movie opens, are buying a tiny apartment in the West Village. It’s a tiny studio but their real estate agent (Linda Lavin) convinces them that it’s a “micro loft.” And they convince themselves they can afford it, since Linda is convinced she’s going to sell HBO her documentary about penguins with testicular cancer. Just as her meeting at HBO goes terribly awry, the financial services company where George works is shut down by the SEC. George and Linda are then forced to move to Atlanta, where George’s horrifying boar of a brother Rick (Ken Marino, who co-wrote the screenplay) has offered him a job at his successful porta potty company. On the way to Atlanta, George and Linda end up spending the night at a bed-and-breakfast run out of a hippie commune called Elysium Fields, where the pot is stellar, the residents are spacey, and the love is free. When Rick’s racist humor, searing arrogance, and McMansion lifestyle get too much, George and Linda, broke and with nowhere to go, decide to try living at Elysium Fields.

That the lifestyle of the commune – or rather “intentional living” – isn’t going to work out for George and Linda is pretty obvious from the beginning. And it’s also obvious that the hippies’ default leader Seth (Justin Theroux) is up to no good. There’s always a snake in the Garden of Eden, and there’s never been a movie made about hippies that isn’t intent on picking apart their idealism and reifying the standard American consumerist lifestyle. And aside from Taking Woodstock, it’s the rare movie about hippies that admits how gay that community was and is; that the free love in Wanderlust doesn’t even hint at bisexuality is pretty lame and very cowardly. But Wain and Marino don’t want Wanderlust to break ground or make point, and certainly not a political. They just want you to laugh.

Rudd is usually best as the straight man playing off someone or something wacky or exasperating – he delivers sarcasm better than anyone – but in Wanderlust he has several scenes in which he gets to be insane. One, in which he’s psyching himself up for some free love, is, well, epic. Anniston, who is a pretty great comic actress, is fine and earns some good laughs, but her role isn’t as meaty as Rudd’s. Alan Alda, as Elysian’s grandpa, is similarly underused, though it’s always nice to see him on screen. Anniston’s current boyfriend, Justin Theroux is a sly, sexy foil, though I felt he was more of a device than a character – as was Elysian’s goddess, Eva, who Malin Ackerman phoned in. Ken Marino and Michael Watkins, who plays Rick’s heavily sedated wife, steal their scenes from Rudd and Anniston; their vicious parody of Stepford suburbia is nothing new, but it’s still wonderful to behold.