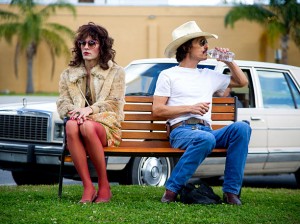 Ron Woodruff (Matthew McConaughey), a newly diagnosed and very sick man with AIDS, says this to his doctor Eve Saks (Jennifer Garner) in the summer of 1985. She had just told him that he can’t get the then FDA unapproved AZT, or any of the promising drugs then only available in Europe. First, Ron bribes a hospital orderly to steal the AZT being used in the study Ron can’t get into. Then, after he figures out the AZT does more harm than good, he starts buying other unapproved medications on the black market. He gets them into the hands and bodies of other people with AIDS through the Dallas Buyers Club, a legally problematic scheme that he borrowed from New York and San Francisco, where other people with AIDS were struggling to find some treatment that actually worked. Ron Woodruff was diagnosed with AIDS in 1985, and in the movie, he is given a month to live. He died in 1992.

Dallas Buyers Club is the story of a man who fought the reprehensible policies of the FDA and the medical establishment during the worst of the AIDS crisis. It is also the story of how a man was transformed from a womanizing, homophobic redneck drunk into a compassionate, responsible hero. The story is a many ways a typical triumph over adversity story, with an obvious structure and ending, and it is also typical in most of the Hollywood stories of the early AIDS epidemic, in which straight people are the heroes and gay people the victims.

That said, Dallas Buyers Club is no Philadelphia, because Ron Woodruff is not a sanitized, perfectly acceptable protagonist like Tom Hanks’s Andrew Beckett. (I’d argue that Beckett is not that film’s hero, who was Becket’s lawyer, played by Denzel Washington.) While he ends up lovable, for much of the film, he’s, well, a jerk. And the film’s second lead, the transgender woman Rayon (Jared Leto), a composite invented by the screenwriters, is one of the most complex, interesting, and affecting characters in any of films about AIDS.

For both Woodruff and Rayon, the writers have produced funny, crass, and pointed lines and many memorable scenes, despite the prison of easy acceptability that is the screenplay’s structure. McConaughey, giving the performance of his career, lost 38 pounds for the role and delivers strings of Texasisms, angry monologues, and mountain of expletives with the gusto and emotional honesty that his last few years as a character actor have only hinted at him being capable of. For example, after Dr. Saks tells him to go to a support group, Woodruff says, “I’m dying, and you’re telling me to get a hug from a bunch of faggots.”

As great as McConaughey is, he is playing a version of McConaughey. Leto’s Rayon is a more complete and more astonishing transformation. Leto not only is unrecognizable, which has a lot to do with his make-up artists, but the depth of his characterization is to be marveled at. Warm, witty Rayon is not a saint either, and her behavior bounces back and forth between selfish and magnanimous, between sympathetic and pitiable. I don’t like how Rayon is used by the writers to make such blunt points and to be the pivot for so much of Woodruff’s transformation. But Leto took their plot device and turned it into a thing a beauty.

Much of why the movie works is the beautiful but raw direction of the French-Canadian Jean-Marc Vallée. His scenes are tightly controlled and packed with emotion, and he creates a great deal of art in his visuals, from bull riding shot through the slots of a wooden gate to a swarm of butterflies lit by flickering fluorescent lights.