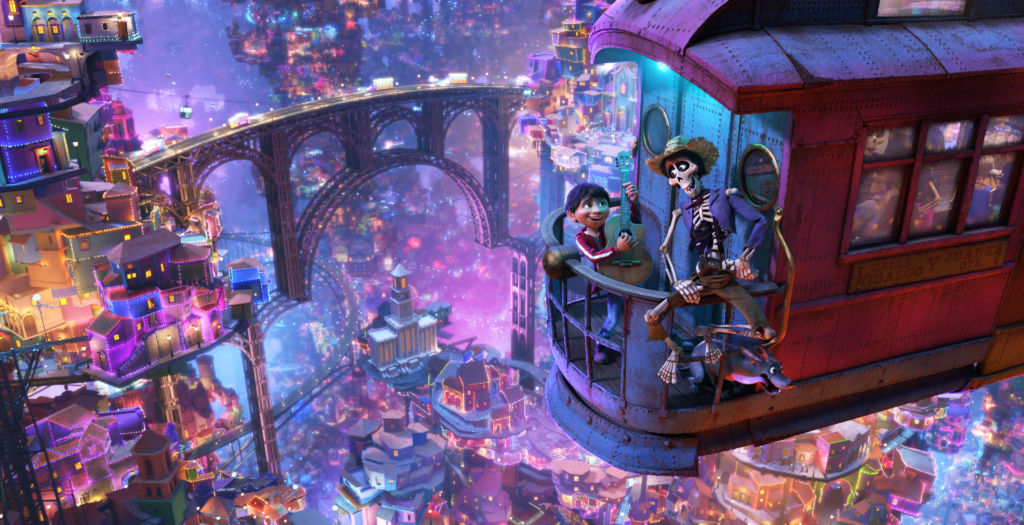 It is possible that I wrote my last review in San Diego LGBT Weekly. Stampp Corbin, who founded the paper in 2010 and who hired me as its film critic in January, 2011, has moved onto other things and as of this writing is looking to sell the paper. But it may not sell, and even if it does, I don’t know if I’ll still be the film critic.

But if it had to end, I’m glad it was Coco. You’d have to stretch to find true queer content (the gay couples folks have noticed are, I’m pretty sure, brothers and a father and son) but Coco is among my favorite animated films ever. Here was my review:

I’ve written before that I cry easily at the movies, and I’ve cried at some terrible ones. I’m still embarrassed that I cried at a screening of the wretched and sappy Jack Frost in 1998. But I’ve never been ashamed that animated Pixar movies have moved me to tears, partly because I’m joined by millions of other weepers, but mostly because the films tend to be so well written that the audience’s emotional responses feel earned rather than manipulated.

While the characters are always archetypes, they are still layered and complex; the plots tend to focus on conflicts most of us experience as young people, but the writers use innovative, often fantastical ways to tell and resolve the stories. The studio’s latest and one of the best is Coco, a film about music, love and death that uses Día de los Muertos to examine the power of memory to define family and identity. It’s stunningly beautiful, very moving and very funny.

Miguel (voiced by Anthony Gonzalez) is a Mexican boy who only wants to become a musician. Unfortunately, after his musician great-great-grandfather abandoned his great-great- grandmother Imelda and their daughter Coco, music was not allowed anywhere in the family’s shoe-making business, their sprawling home, or, it seems, even their thoughts. When they discover Miguel playing a guitar in the town plaza, his family, especially his Abuelita (Renée Victor), react as if he’d joined a violent gang – the horror! While initially he is willing to abide by the rules, on the day of Día de los Muertos he determines that his missing great-great-grandfather was none other than his hero Ernesto de la Cruz, barrel-chested 1940s matinee idol and “the greatest musician in the world.”

As people decorate gravestones with marigolds and tasty treats for the only night long-departed spirits are allowed to visit, Miguel breaks into Ernesto’s mausoleum to retrieve the musician’s famous white guitar. And suddenly Miguel and his dog Dante are transported to the exquisitely garish land of the dead, where everyone is a skeleton and they are all flabbergasted that he’s there, alive, and fleshy. He needs the blessing of a family member to get home, but his bony relatives, led by Imelda (Alanna Ubach), won’t send him back unless he promises never to play music again. So, he runs off to find Ernesto with the sad sack Hector (Gael García Bernal), who is fading away as he is being forgotten back in the living world.

Adrian Molina and Matthew Aldrich’s flawless script is both a hero’s journey through the underworld and also a domestic dramedy about the ways tight-knit, multi-generational families try to resolve their oldest, most painful conflicts. And it also a mystery: Why is the film called Coco? They manage to explain the beauty and particulars of Día de los Muertos without being pedantic, and they thread in knowing jokes about Mexican families and culture without being obscure or offensive. Grandmothers wield their shoes like revolvers, the skeleton of Frida Kahlo makes several absurdist cameos, and Ernesto’s films are perfectly silly parodies of Mexican cinema of the 1930s.

The songs, written by Frozen Oscar winners Kristen Anderson-Lopez and Robert Lopez, are beautiful hybrids of American pop and traditional Mariachi. I predict “Remember Me” will be omnipresent before winning the Oscar for Best Original Song. It, too, does double duty. First it is a bombastic hit for Ernesto in the 1940s, and then it is sung as a heart-breaking duet. It was during the latter when I cried bittersweet tears.