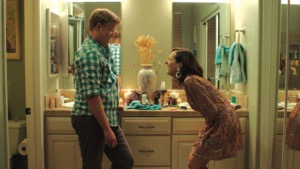 The odd distribution plan for the exceptional Other People says a great deal about how film has changed with the advent of streaming services, especially in regards to independent film. In the past, movies with tiny budgets and niche audiences (especially gay ones) could only be found in art houses in large cities before showing up on video many months later. Other People opened in a handful of theaters in the United States Sept. 9 – and none were in San Diego – but it also became simultaneously available online to rent for half the price of one of the theater tickets. While the experience of seeing any movie in a theater is always preferable to seeing it on TV, Other People is not Gravity or The Tree of Life – it’s a comic drama set mostly in suburban Sacramento and the focus is on the writing, acting, and interpersonal emotions, not landscapes, special effects, and narrative sweep. Your TV is fine. And seeing it at home might be best when you’re in the midst of an ugly cry.

Other People, a hit at Sundance that closed Outfest in Los Angeles this summer, is the directorial debut of Saturday Night Live writer Chris Kelly. It is both funny enough to have left me with sore stomach muscles and sad enough to earn my own ugly tears. Based on his own experience dealing with his mother’s death, the film focuses on Kelly’s alter ego David (Jesse Plemons), a struggling comedy writer who returns home to Sacramento from New York after his mother Joanne (Molly Shannon) has been diagnosed with cancer. David has broken up with his long-term boyfriend Paul (Zach Woods) but doesn’t want to tell anyone in his family, not his mother who doesn’t need to worry about David and not his father Norman (Bradley Whitford) who can’t handle, or even speak of, David’s gayness. Joanne is fabulous and funny and she does her best to stay positive as her condition worsens. David, while helping his mother in every way he can, is wracked with self-loathing, doubt, early grieving and loneliness. When he can, he spends time with a childhood friend Gabe (John Early), whose little brother (J.J. Totah) is a precocious gay tween.

The film opens with Joanne’s death, so the ending is pre-determined, focusing the film on David and his relationships rather than on the tension of whether or not Joanne’s cancer will beat her. Kelly’s writing, both in his raw, off-kilter humor and his finely observed emotional realism, is exquisite, part Stephen Falk (You’re the Worst), part Andrew Haigh (Weekend), part Woody Allen. His direction is also striking, with smartly controlled, carefully detailed scenes featuring excellent performances from the leads, supporters and even cameos. Most notable is, of course, Molly Shannon’s truly great, Oscar-worthy performance as Joanne. It features her trademarked ebullience and enthusiasm, but she also is just as effective in subtle, quiet, raw moments as she is when she’s the life of the party. She’s brave, brilliant and devastating.

Jesse Plemons and Bradley Whitford are both fantastic, too. Plemons, perhaps with two too many ticks, is the rare gay lead without overly straight or stereotypical affectations; he’s a recognizable, complex, messy man. Whitford complicates the homophobic father, making him not a bigot, but instead limited and cloistered and simply ill-at-ease. In smaller roles, June Squib, John Early and particularly the outrageous Totah prevent even the short, filler scenes from slowing the film down. It’s a small film, but a remarkable one, worthy of the widest attention possible.

Written and directed by Chris Kelly

Available to rent and own on iTunes, Amazon and Google Play 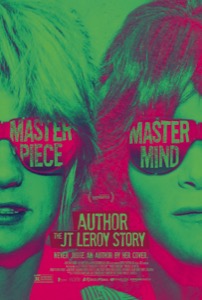 Twenty years ago, the it author of the moment – at least in avant garde, hipster, queer circles – was Jeremiah “Terminator” LeRoy, better known as JT Leroy. A teenage sex worker, vagrant and drug addict turned literary wunderkind, Leroy started publishing autobiographical stories in 1996, when he was 16. In 1999, he released two lyrical, dark and shocking books, the novel Sarah and the story collection The Heart is Deceitful Above All Things, to immense acclaim. He had a following of major literary and arts figures, including novelists Dennis Cooper and Bruce Benderson, memorist Mary Karr and poet Sharon Olds and rockstars Shirley Manson of Garbage, Courtney Love of Hole and particularly Billy Corgan of The Smashing Pumpkins. But in 2005, several journalists figured out that Leroy didn’t exist. His writing was done by the much older San Franciscan Laura Alpert and his personal appearances made by Alpert’s sister-in-law, Savannah Knoop. The scandal was bizarre and titillating and embarrassing for a number of people, and Jeff Feuerzeig’s fantastic documentary Author: The JT Leroy Story does the seeming impossible: makes sense of the whole thing.

Feuerzeig is both lucky and skilled. His subject is Alpert, who not only is unflinching in the recounting of her story, admitting every detail and explaining her practical and psychological reasoning, but she also kept everything. We are privy to her drawings, hand-written writings and the numerous recordings she kept of her conversations with everyone from Courtney Love to Dennis Cooper. Feuerzeig edited Alpert’s archives along with old press footage, amateur recordings and new interviews, creating a beautiful, seamless monument to fame, fiction, psychopathology and fraud. Author is an instructive history lesson, but it is also entertaining in a way that I never was able to find Leroy’s writing: it is funny and moving and, most importantly, true.