I love it when Streep is Streepy 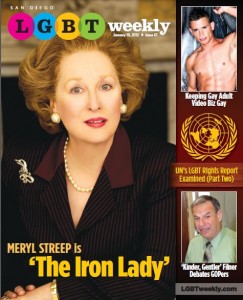 It wasn’t even my lead review the week I wrote about The Irony Lady, but it ended up being the cover story for LGBT Weekly. Ha.

The buzz on The Iron Lady has been that Meryl Streep is amazing as Margaret Thatcher and the movie isn’t very good. Since I don’t read reviews before I write mine, I’m not sure why the buzz isn’t that Streep is amazing and the movie is excellent. Because I loved it. Told in flashbacks from the perspective of an elderly Thatcher heading into the dementia from which she now suffers, The Iron Lady is in some ways a typical biopic; we see her go from an eager and brilliant daughter of a grocer to a prickly and ambitious member of parliament to become, finally, the longest-serving prime minister of Great Britain in the 20th century – the century’s most powerful woman.

True, the film isn’t perfect. It is top-heavy with Thatcher’s elderly doddering, and at times I felt that Streep was perhaps too funny, that Jim Broadbent, as Mr. Thatcher, was too silly. And worse, I was worried that I was developing a deep fondness for someone whom my liberal heart wants me to loathe. But by the end of the film, I found it to be balanced; Thatcher’s downfall in 1990 is depicted as deserving, and her flaws as a mother and wife are never hidden.

But director Phyllida Lloyd and the brilliant screenwriter Abi Morgan do what Clint Eastwood failed to do in J. Edgar. They didn’t make a dull history lesson; they created something artful, inventive, intriguing, wry and entertaining. Much – but not all – of this is because Streep gives a performance as towering as any in her career. There isn’t an emotion that she does not nail, and, of course, her accent, delivery and body are more than imitations of Thatcher. Streep’s performance is funnier, bolder and more moving than anything one could get from documentary footage.