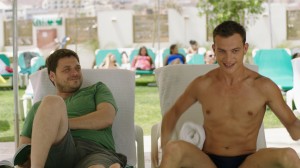 In 2002, Eytan Fox gave the world Yossi & Jagger, a beautiful, sexy, and deeply moving love story about two Israeli soldiers; it was the Hebrew Brokeback Mountain, and it came out four years before Ang Lee’s now-classic. Ten years later, Fox decided to do something usually only seen on fan fiction sites. He made a sequel. And like Ryan’s Story, the ill-advised follow-up to the classic Love Story, Yossi was a bad idea, coasting on the memory and good will of the much better, much more powerful previous film. Yossi, which follows one-half of the couple a decade later as he tries to break free of his broken, cloistered heart is not actually bad. As the titular character, Ohad Knoller, who has become somewhat of a bear, is too mopey, but when he lets himself feel again, it’s hard not to be moved. As his new love interest, a young, extroverted, and very out solider named Tom, Oz Zehavi is no Yehuda Levi, who played Jagger, but Zehavi is magnetic and eager, the perfect antidote to Yossi’s depression. Fox has made better movies, but the sensitivity and subtlety of his direction makes this small, slight movie surprisingly rich.