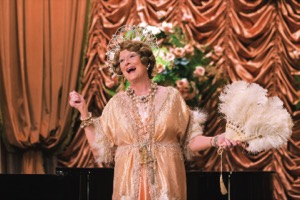 Florence Foster Jenkins, who lived from 1868 to 1944, was an eccentric heiress who used her considerable financial resources to stage and promote her musical career. She needed to use her own money because, despite having as a child been somewhat of a piano-playing prodigy, she was a terrible singer, probably both tone and beat deaf (possibly because of advanced syphilis). With her common law husband St. Clair Bayfield as her manager, she self-produced and self-promoted small concerts for friends and acquaintances, most of whom thought her outrageous costumes and bizarre vocals were hilarious. But it seems she wasn’t in on the joke. She had no idea how bad she was until she had a sold-out show at Carnegie Hall in 1944 and legitimate critics came and savaged her. Devastated, she had a heart attack a week later and she died a month after that.

Stephen Frears’ charming, funny and moving biopic of Jenkins, written by Jenkins’ biographer Nicholas Martin, stars Meryl Streep as Florence, Hugh Grant as St. Clair and Big Bang Theory’s Simon Helberg as Cosmé McMoon, Florence’s accompanist. The film takes place during the last year of Florence’s life and condenses many events into a short period, all leading up to the Carnegie Hall performance. After seeing a particularly powerful performance by a famed soprano, Florence is inspired to sing again, after many years performing only tableau vivants and patronizing arts organizations. St. Clair helps her hire Cosmé and Carlo Edwards, a well-known vocal coach, to work with her. Cosmé is astonished by Florence’s lack of talent and St. Clair and Carlo’s dishonesty, but Florence is paying so well, he keeps playing for her. After rapturous applause following a small, private concert for her friend and glowing reviews paid for by St. Clair without her knowledge, Florence gains even more confidence. She makes a record and when St. Clair is out of town with his girlfriend (Rebecca Ferguson) – as he and Florence have an “understanding,” he says – Florence sends it to a radio host. The record is a hit and this leads to Carnegie Hall.

The film, as biopics do, simplifies a great deal. Florence is depicted as utterly clueless about her talent, or lack thereof, and St. Clair is carefully managing the world around her to protect her. While St. Clair clearly adores Florence, he is also profiting from her happiness, since he was never good enough an actor to have had a career leading to the lifestyle he led. In reality, St. Clair was a successful actor who worked constantly in supporting roles and was one of the founders of Actor’s Equity. And Florence seems to have been much more involved in protecting herself from critics, having written under pseudonyms some of the implausibly good reviews that appeared in the less reputable press. I think showing Florence as a slightly more cynical self-promoter would have made for a more interesting film, if a less sympathetic lead.

I’m sure the irony of the world’s greatest living actress playing a woman described (often) as “the world’s worst singer” was not lost on the producers of Florence Foster Jenkins. Streep is at her Streepiest in her unsubtle, mannered performance, and she’s delightful, not only when she’s singing badly and sporting ludicrous costumes, but particularly in her deeply sweet moments of doubt and vulnerability. Helberg’s broad comic performance provides the eye-popping double takes needed to signal the audience that we’re supposed to laugh. But the film’s hero is Hugh Grant, giving the best performance of his career as an oddly devoted husband in an impossibly weird marriage.