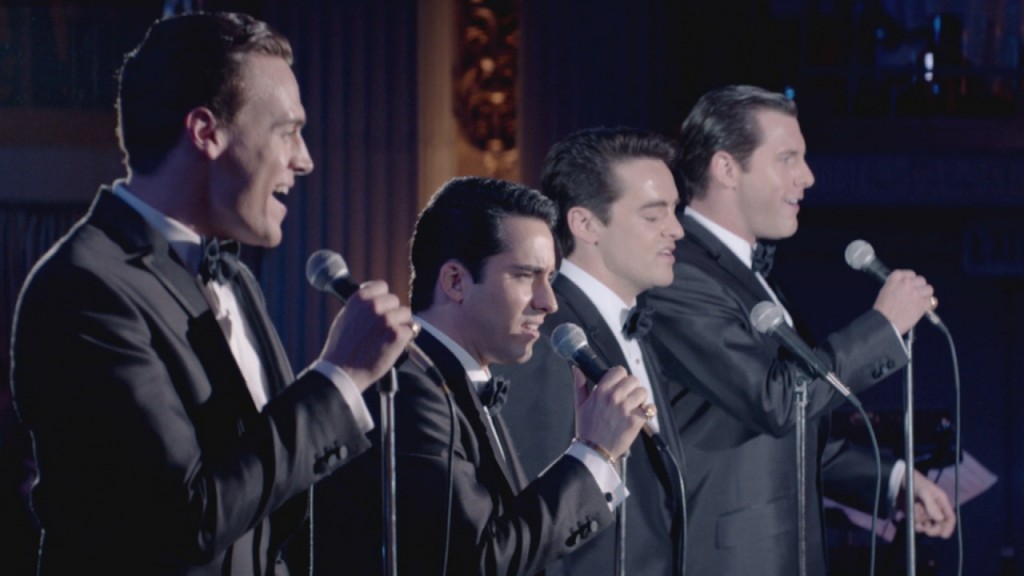 A few weeks ago, I was hanging out with one of my best friends, a musical theater composer who has impeccable and refined taste. I had mentioned that I was going to review the Jersey Boys movie and he told me that when he saw the stage musical, it was so thrilling, “I wanted to throw my panties on the stage.” The musical was directed by the brilliant Des McAnuff, who also directed The Who’s Tommy and was the artistic director of the La Jolla Playhouse when Jersey Boys premiered there in 2004. I never saw it on stage, but I take my friend’s word for it that the Four Seasons jukebox musical deserved the adulation and the four Tony Awards. I have to take his word because as a film, as directed by Clint Eastwood, Jersey Boys is nostalgic pabulum. Based on the film, it was hard for me even to understand why anyone would care so much about the Four Seasons, who are one of the most successful musical acts of all time, having sold more than 100 million records.

The film is a typical musical biopic, tracing the rise, peak, fall, and redemption of the band. It is narrated by the four original members of the band in succession. First is Tommy DeVito (Vincent Piazza), an ambitious New Jersey tough guy who claims the only way to get out of the neighborhood is join the army and probably die, join the mafia and probably die, or get famous, like Frank Sinatra. He did the latter two, and it’s his mob connections that help propel the band he conceived, played bass, and arranged vocals for onto the charts. Much of that has to do with putting his younger, unsure friend Frankie Castelluccio (John Lloyd Young) on lead vocals. Frankie, getting an ego, changes his last name to Valli before they meet the serious, wise, and absurdly talented Bob Gaudio (Erich Bergen), the second narrator, who wrote or co-wrote all of the band’s hits. They meet Bob Crewe (Mike Doyle), a flamboyant producer, and with his help, release three number one hits in a row: “Sherry,” “Big Girls Don’t Cry,” and “Walk Like a Man.”

While this is happening, the band starts fighting, partly because Tommy resents Frankie and Bob’s talent and closeness and but also because Tommy’s financial and managerial control of the band veers between incompetent and criminal. Nick Massi (Michael Lomenda) takes over narration as the band falls apart because of Tommy’s ill-advised dealings with a loan shark and his accrual of $500,000 in back taxes. Finally, after Nick quits, Tommy is kicked out of the band, Bob decides only to work in the studio, Frankie is left alone on stage, earning money to pay back the band’s debt and trying to repair relations with the family he left at home while he was on the road. Somehow, there is a redemption of sorts when Frankie sings “Can’t Take My Eyes Off You,” which would have been a more interesting sequence if the true story of its inspiration was told: Bob Crewe came up with the lyrics while staring at his sleeping young male lover.

There’s certainly enough drama and certainly enough good songs for a stellar musical, but Clint Eastwood, known best for his no-nonsense naturalism, is a strange choice to make it. He does well with the 1950s New Jersey organized crime sections, but his staging of the songs is so, well, realistic that there’s little thrill to them. It’s felt as if I was just watching four guys singing. As usual with his movies, Jersey Boys has impeccable art direction, cinematography, and editing, but unlike with Unforgiven, Mystic River, Million Dollar Baby, or Letters from Iwo Jima, Eastwood isn’t working with brilliant film actors. (A notable exception is the slyly hilarious Christopher Walken, playing a mafia don.) John Lloyd Young constantly over-expresses his emotions, as if he were still on stage, and Vincent Piazza seems to be doing a poor imitation of Ray Liotta from Goodfellas. Michael Lomenda and Mike Doyle provide comic relief, but it’s weirdly cheesy, like much of the film. Worst of all, at the end of the film, when the band reunites for their induction to the Rock & Roll Hall of Fame in 1990, the aging make-up is gasp-worthy terrible. They’re all supposed to be in their fifties, and they look like corpses. Who’d throw their panties at that?