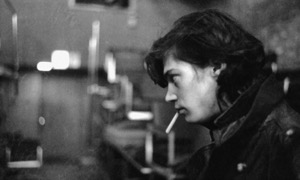 In April of 1990, the Cincinnati’s Contemporary Arts Center opened its doors to Robert Mapplethorpe: The Perfect Moment, a retrospective of the famed photographer who just recently died from AIDS. I was 15 and had grown up in the Queen City, as it was called, and Dennis Barrie, the director of the CAC, and his family lived across the street. I babysat the kids, and my parents were close with the Barries. I had seen photocopies of the pictures in the exhibit at dinner one night. I grew up in a very liberal home, but these raised my eyebrows, partly because I knew I was gay and partly because some of the grainy, poorly reproduced pictures on the Barries’ dining room table depicted the kind of gay that scared me as a closeted teenager in the conservative Midwest at the height of AIDS.

When the exhibit was supposed to be shown at the Corcoran Gallery in Washington, D.C., early that year, conservative Christians raised such a ruckus that the show was cancelled. Mapplethorpe was most famous to the general public for his iconic photographs of flowers and his sublimely printed portraits of celebrities. But he also took numerous pictures that some would call erotica and others would call pornography and Sen. Jesse Helms would call “morally reprehensible trash.” They included some relatively tame (by current standards) images of men showing affection while naked as well as some very explicit images of fisting, sounding and other sadomasochistic acts. Despite the content, the images are perfectly lit and composed, but people like Helms didn’t care (and probably didn’t understand). It’s obvious how vile they were: “Look at the pictures!” he said on the Senate floor railing against the National Endowment for the Arts for giving grants to him and other objectionable artists like Andres Serrano.

Look at the Pictures is the subtitle of Fenton Bailey’s and Randy Barbato’s nearly perfect documentary about Mapplethorpe that is available at HBOGO and premiered last month. Its release coincides with a massive retrospective of his work showing at both the Getty and Los Angeles County Museum of Art. I was honestly shocked that such a film hadn’t already been made, considering how iconic Mapplethorpe was as an artist, a celebrity and a lightning rod. It was worth waiting for Bailey and Barbato, who also made Party Monster, The Eyes of Tammy Fay and Inside Deep Throat.

Mapplethorpe’s aged mother, his sister and his younger brother give extensive, insightful and not always flattering interviews about the artist’s almost pathological ambition, his perfectionism and hunger for fame. Interviews with some of his most famous models – from Ken Moody and Robert Sherman to Brooke Shields – describe his studio methods and idiosyncrasies. Various members of the 1970s and 1980s New York avant garde – from Debbie Harry to Fran Lebowitz – talk about his extensive, often strategic socializing. (Oddly, Patti Smith, who was Mapplethorpe’s best friend and lover in the early 1970s, is nowhere to be seen; a producer said that she “didn’t make that impossible” to be included.)

Bailey and Barbato’s access to interviewees and to Mapplethorpe’s entire archive (now housed at the Getty Center in Los Angeles) allowed them to make a truly comprehensive film, but their skill as interviewers, editors and historians is what makes Look at the Pictures not just deeply informative but also entertaining and moving. Despite Mapplethorpe’s careerism and narcissism, he was an immensely sensitive artist who pulled out incredible emotion from perfectly sculpted lights, darks, bodies and shapes. His photos of flowers were as sublime as his arguably most famous photo, that of a massive uncut black penis hanging out of a polyester suit.

I was particularly fascinated by that image as a teenager, more than all of the images I was also fascinated with. The photos awakened a great deal inside me, artistically, intellectually and sexually. I wrote a letter to the Cincinnati Enquirer arguing in favor of the exhibit after Dennis Barrie was indicted on obscenity charges for bringing the show to the city. I received seven death threats, including one that said “Drop dead! Go to hell! The devil could use you to shovel shit!” Barrie was acquitted. I became a writer, a critic and an AIDS researcher.

Robert Mapplethorpe: Look at the Pictures