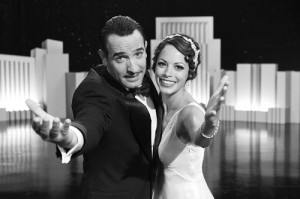 Okay, I totally dug The Artist. My review, which can also be found in LGBT Weekly:

Usually, I do a little bit of research about a movie before I see it. At least, I’ll scan the entry on IMDb.com, just so that I have an idea about what I’m about to see – some plot threads, the resumé of the actors or director, and the like. Though I won’t read anyone else’s reviews if I am planning on reviewing it myself; some critics are too good at their job and their arguments cloud mine. But I was very busy the day I saw The Artist, and I went in only knowing that it had been named by the New York Film Critics Society as the best movie of the year. I didn’t even know that the movie was silent, or that it was in black and white.

When I realized about 15 minutes in that both its black and whiteness and its silence were going to last for, probably, the whole film, I thought back to it being named the best film of the year by groups of critics, and I thought, “Well, there must be some avant-garde twist – it’s going to be colorized, or the sound will come in halfway through, or it will turn into a cartoon.” And I waited, and it didn’t happen. No, The Artist is a silent black and white movie, and that’s all that it is.

But it’s an amazingly entertaining black and white silent film, as skillfully made as any movie released this year. The only thing that makes the film modern is the plot, which is meta enough to be called post-modern: It’s a silent film about silent films. It tells the parallel stories of super star silent film actor George Valentin (Jean Dujardin), whose career and life fall apart with the advent of talkies in 1929, and up and coming ingénue Peppy Miller (Bérénice Bejo), whose movie career starts after a chance meeting with Valentin and then sky rockets after sound changes the industry.

The plot is somewhat reminiscent of A Star is Born, but it has very little of the pathos or melodrama of any of the versions of that classic. George’s decline is sad and dark, but silent film, especially one using the style of film of the 1920s, does not lend itself to the sort of subtle realism that contemporary moviegoers expect from their emotional dramas. Instead, the Belgian writer and director Michel Hazanavicius uses bold but not heavy symbolism, expressive and almost mime-like facial expressions, and chiaroscuro cinematography that reminded me, at times, of the shots of Busby Berkeley, Fritz Lang and Orson Welles. With a rollicking, pitch perfect period score by Ludovic Bource, the film really feels as if it was snatched from the late ’20s.

And Dujardin could have been a matinee idol in the 1920s, and if he had been, he would have rivaled either Douglas Fairbanks or Rudolph Valentino, who George is clearly modeled on. Dujardin is not only almost inhumanly handsome, but his ability to emote without a single word and with such gorgeously choreographed gestures and expressions makes his presence on screen simply tantalizing. As sweet and perky as Bejo is as Peppy, whenever Dujardin was gone, I yearned for his return. It’s a stellar performance.

I was surprised by how much I liked The Artist. It is a perfect film. But I am somewhat perplexed by it. Why make a silent film almost exactly as it would have been made in 1929? (I say 1929, not 1928, because there are a few moments of non-musical sound, and that wouldn’t have been possible until the last year of the 1920s.) As I watched The Artist, I wondered whether it was the greatest film school exercise of all time. Then I realized that Hazanavicius was simply paying homage to a period of history and period of art that has been forgotten, and he does it with skill that rivals if not surpasses his idols..