Judi Dench is my spirit animal 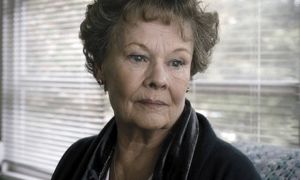 I recently saw a comment about Philomena that described it as the inoffensive movie your mother will love. While I didn’t quite find that to reach the level of offensive, it did stick in my craw. Of course, there are movies cynically made for specific audiences – Tyler Perry makes movies largely for black audiences, and Michael Bay makes his for teen-aged boys – and I’m sure that some marketing professional has figured out that Judi Dench, who plays the titular character, is a favorite of middle aged women. However, the comment made it sound like Philomena was a movie for mothers, in the way that romances are supposedly “chick flicks,” as if men aren’t supposed to enjoy movies featuring large roles for strong female characters. If you can identify with the film’s central characters, you can enjoy the movie, and I think it takes a small mind not to believe that just about anyone can identify with an older woman looking for her long lost son. Especially if that older woman is Judi Dench at her most sympathetic.

The film is based on Martin Sixsmith’s book The Lost Child of Philomena Lee, which tells the story of a retired Irish nurse who reveals to her daughter, fifty years after the fact, that as an unmarried young woman (Sophie Kennedy Clark), she gave had given birth to a son in a convent. As repayment to the nuns, she was forced to work as their indentured servant and was forced to give her son up for adoption. In the film version, Martin, who is played by Steve Coogan, who also co-wrote the screenplay, decides to tell Philomena’s story after being fired as a spin doctor for Tony Blair’s government and figures that a human interest story could be his entry back into journalism. Martin is an upper class snob who attended Oxford and his initial feelings about the common, naïve, romance novel-reading bitty are both comic and slightly appalling, particularly when recounted to his cynical editor (Michelle Fairley).

But as Martin spends more time with Philomena, learning more about her story, about the revolting behavior of the nuns, and about what may have happened to her son over the years, he becomes more empathic. This is jumpstarted by Philomena’s stern reprimands to his more snide remarks. Philomena is not just an old pensioner with a sad story, it turns out. While untraveled and unsophisticated, her kindness and curiosity are expansive, and her power for love is only surpassed by her power for forgiveness. Dench is as easy a comedian as she is a tragic heroine, and her versatility and believability are why she is one of the world’s great actresses. This struck me particularly during the close-ups of the wistful gazes that represented her remembering the trauma of the convent. Unlike Bruce Dern’s blank stares in Nebraska that meant nothing, Dench communicates entire narratives with her eyelids. It’s a remarkable performance.

However, the movie is not simply a vehicle for Judi Dench’s awesomeness. Coogan, who is one of Britain’s great comic actors but is less known here, makes Martin Sixsmith both obnoxious and likable, with his snarky eye-rolling at Philomena’s old lady-ness tempered by his dogged support and defense of her as her story becomes more complicated. His screenplay and Stephen Frears’s direction are trickless and straightforward, and this makes some of the more astonishing twists in the narrative worthy of gasps. (And Coogan handles the revelations about Philomena’s son better than Sixsmith originally did.) The film is by no means perfect; the flashbacks are too dreamy and some secondary characters are under-written. This is, at its heart, a sentimental journey, but Coogan, Frears, and composer Alexandre Desplat made sure that it was not a maudlin one.